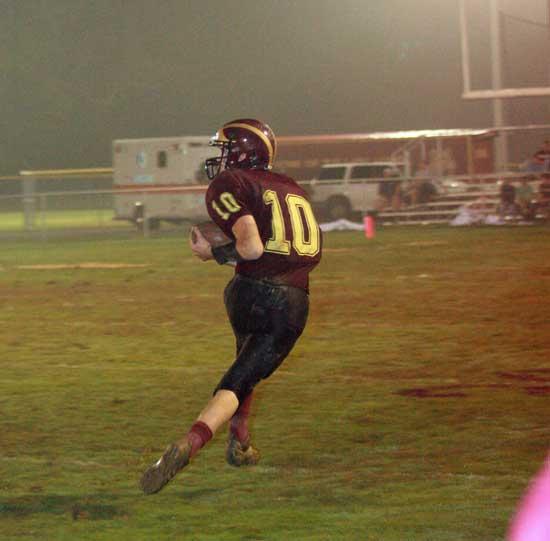 Heath Simons catches the go-ahead touchdown pass from QB Lee Cooper against York Institute Friday night. (Photo by Ronny Burks)
In a tale of two halves, Cannon County won the one that mattered the most Friday night.

The Lions played their second district game Friday against the 8th-ranked York Dragons on a rain-soaked Fred Schwartz field, and emerged with a stunning 20-14 victory.

The sloppy field led to sloppy play by the Lions as they fell behind, 14-0, but the Lions battled back in the second half.

Coach Joel Schrenk said that he “challenged the players at the half.” The team that took the field in the second half was entirely different than the team that had left just minutes earlier as they went on to win, 20-14.

The Lions started to move the ball offensively and their defensive unit completely shut down the high-powered York offensive unit, holding them scoreless the second half.

The Lions finally got on the scoreboard with 3:07 left in the third quarter when QB Lee Cooper hit Andy Agee for a 31 yard touchdown pass. The failed extra point made the score 14-6.

On York’s next possession, Damon Collette intercepted the ball at the Cannon 43. Cooper again hit Agee for a 41-yard touchdown pass and with the failed extra point the Lions closed the score to 14-12.

Midway through the fourth quarter, a Cannon interception by Daniel Woodin led to the third TD pass by Cooper, hitting a wide open Heath Simons, who ran it in on the 41 yard reception.

Defensive player, Tyler Jacobs said, “I knew we were going to win when we went ahead.”

With time running out and the Dragons desperate to score, Jacobs unloaded on the York QB, causing a fumble that was recovered by York deep in their territory.

With 3:00 left in the game, Emby Mills closed out the Lions scoring with a QB sack in the end zone for a safety, giving the Lions a very important district win.