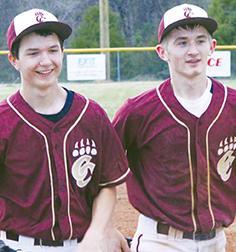 There have been growing pains associated with the Cannon County baseball team in 2014.

That tends to happen when the roster is comprised of no seniors and just four juniors.

The Lions (2-13) did some growing up against Gordonsville, coming back with a seven-run sixth inning to rally for a 9-5 win at the Cannon County Baseball Complex Thursday (April 3).

What makes the Lions' comeback even more impressive is the fact they had blown a 2-1 lead in the top of the sixth as the visiting Tigers went ahead 3-2. This was just two days after Cannon County had blown a 7-1 sixth-inning lead in a 10-7 extra-inning loss to Livingston

"This team has shown a lot of fight," Lions coach Justin Fann said. "I was proud of the way they came back. We had lost in dramatic fashion Tuesday and it would have been easy for them to roll over. They didn't do that."

Not only did the team mature, but so did sophomore pitcher Austin Martin and freshman Sam Schau.
Martin provided the Lions with six strong innings, scattering six hits and allowing three runs. All three runs came in the top of the sixth. Until then, Martin had stymied the Tigers. He allowed no runs on three hits through the first five innings before started to tire.

"Austin has been pretty consistent all year," Fann said. "He struggled a little in that loss to Livingston (Tuesday) but we have confidence in him so we wanted to put him right back out there."

Martin earned the win because the Lions rallied in the bottom of the inning. They erased a 3-2 deficit with a seven spot to go on top 9-3. Schau came on to seal the win. The righty pitched around two errors and got out of seventh-inning trouble.

"That's a tough situation to put a freshman in, but Sam is fairly mature," Fann said. "He struggled a little bit but after he got through the nerves, he settled in. It was a learning experience and we were able to get him some innings. It's great that he got to come in and do that."

Trailing 3-2 going to the bottom of the sixth, Tucker Francis began the uprising when he was hit by a pitch to open the frame. Jared Judkins reached on an error and Jackson Mason walked to load the bases. Josh Williams was hit by a pitch, forcing Francis home and tying the game, 3-3.

After Gordonsville finally got an out, Jake Todd delivered a perfect suicide squeeze that plated Judkins for what proved to be the game-winning RBI. Todd reached on a fielder's choice. Nick Vassar followed with a run-producing hit to push the lead to 5-3 but the visiting Tigers committed two errors allowing two more runs to score on the play. Before the inning was complete the Lions came off of the deck for seven runs and their biggest inning of the season.

Vassar, Martin, Francis, Judkins, Mason, Preston Campbell and Trent Bragg all had one hit each for the Lions.

Campbell also turned in two outstanding plays in left field, including a running, diving catch in short left with a runner in scoring position.

The Lions went on top 1-0 in the second when Judkins singled, stole second and scored when Campbell struck out but reached on a wild pitch. They pushed the lead to 2-0 in the fifth inning when Campbell tripled and scored on Martin's clutch two-out hit.