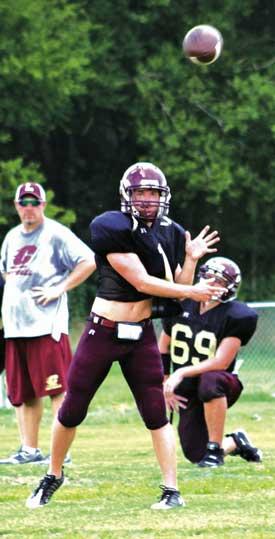 James’ skill level is high and he is among the team’s best all-around athletes but the one quality he lacks - experience - can only be improved with playing time. There will be growing pains as there always is with young quarterbacks but James’ decision-making will be a key to Cannon County’s offense and the quicker he is able to grasp all aspects the more efficient the unit will become.

“Brandon knows what to do and he can do the job at quarterback,” Schrenk said. “He has talent and skills but his decision-making will be the big thing as we continue through camp and into the season. He has to apply his knowledge and talent every snap and not take any off.”

Experience was a key for Cannon County during its District 8-AA championship run in 2009 but the offense will be chiefly inexperienced this season with a sophomore quarterback and the possibility of three sophomores and a freshman among the men in the trenches protecting him, not to mention underclassmen at various skill positions.

Can James handle the pressure of learning one of the most important positions on the field and also providing the leadership role it requires?

“I’m ready for the challenge,” James said. “I’ve worked hard during the off-season and this is what I want to do. I love the game. I know I have a lot of work to do and there are areas where I will have to continue to improve, but I’m ready to lead this team and the offense has spent a lot of time working together because so much of what we do is timing.”

Schrenk says it is important for his young signal-caller to realize big numbers are not as important as steady play when it comes to yielding positive results under center.

“We have to get solid play at quarterback,” Schrenk said. “We don’t have to win every game at the quarterback position, but we don’t want to lose them there either. I believe Brandon has an understanding of what we want to do but you still have to reach a comfort level of getting out there under the lights and executing it.”

And when there are mental lapses or the offense breaks down James’ athleticism could be his strongest trait as he has a knack for making defenders miss in the open field and the speed to break off long chunks of yards with each carry.

“I believe I’m a good fit for our offense and I’m comfortable in it,” James said. “We are going to be young on offense but if we know our assignments and carry them out we should still be able to execute what we want to do.”