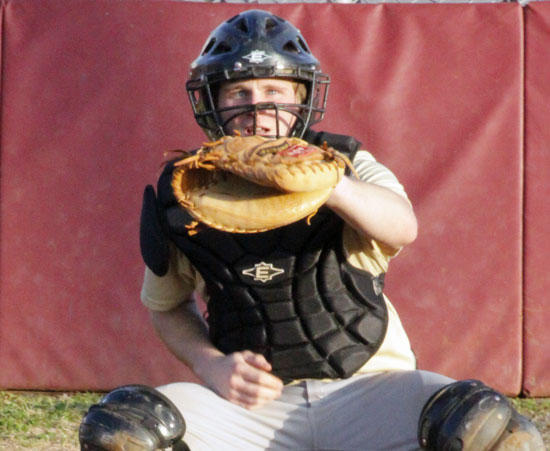 CCHS senior catcher Dustin Mears and the 2012 Lions baseball team opens the season at Warren County Monday. Spring sports blooms into full swing for all CCHS spring sports teams next week. (Courier staff photo)
Cannon County returns 10 players who saw extensive action during an encouraging 2011 campaign but the Lions will have to adjust to their third different coach in four seasons in 2012. First-year coach Tony Stinnett takes over for Eddie Cunningham, who resigned to accept a football position at Riverdale High School.

Stinnett will be assisted by Jake Nokes and Adam Sauer. Matt Cagle is the faculty representative. Several current upperclassmen were thrown to the fire as youngsters in the program and the experience gained during the previous two seasons should be an asset in 2012.

Lorance and Phillips should provide power in the middle of the Lions offense, while Bell and Brown bring speed and instinctive baserunning skills to the table at the top of the order. SR Dustin Mears has been solid at the plate during the preseason and will be a factor in the team's offense.

Nathan McGuire, sophomore, will challenge for a starting job and has power potential. Brent Duggin combines power and speed and Justin Weaver is another threat on the bases. JR Chase Gunter is a good contact hitter and also has above-average speed. SR CW Alexander and freshman Jackson Mason add to Cannon County's depth with Alexander making great strides after taking last season off.

Francis logged the second-most innings (48.2) and started eight games in 2011. Bell and Lorance were not used as extensively but their roles will be greatly increased in 2012. Francis, Bell and Lorance will lead what expects to be a deeper Lions pitching staff in 2012.

SR CW Alexander and SR Dylan Miller will also be looked upon for innings and factor into the Lions' pitching plans. JRs Brent Duggin, Brian Duggin, Chase Gunter and Justin Tobin round out what has developed into a strong junior class.

SO Nathan McGuire has enjoyed a strong preseason and should challenge for a spot in the rotation. FR Nick Vasser also will play a significant role on Cannon County's pitching staff after a consistent preseason, and FR Jackson Mason provides a young power lefty.

The Lions return two-time, first-team All-District SS Austin Brown in the middle infield. SR Cody Phillips and SR Dustin Mears should man the catching duties. Both are solid field generals behind the plate. Phillips also will serve in a utility capacity, seeing time at first base, outfield and DH, in addition to behind the plate. Mears provides a hard-nosed catcher with strong leadership. FR Trent Bragg has a promising future behind the plate.

SR Cody Lorance (6-foot-4) provides a big target at first base and the lefty also is a sure-handed fielder. JR Brian Duggin has also made strides in the offseason and provides a solid glove in the infield.

SR Brock Francis, JR Chase Gunter, JR Jarrett Melton and FR Nick Vasser all factor into the team's plans in the middle infield. SO Nathan McGuire, and SRs CW Alexander and Dylan Miller have competed for third base responsibilities and provide the Lions with three sure-handed fielders.

The Lions also like their outfield depth. CF Dalton Bell (JR) has made the transition from 3B to OF, allowing him to display his athleticism and strong arm. JR Chase Gunter and SR Justin Weaver also provide outstanding speed in the outfield and have been amongst the top defenders. JR Brent Duggin combines a strong arm with good instincts in right field. SR C.W. Alexander, JR Justin Tobin and FR Jackson Mason have been solid during the preseason and provide the Lions with multiple options in the outfield.

Experience and leadership would seem to be positives as the Lions roster includes 11 seniors and nine juniors; however, only nine of those 20 were on the team last season.

Cannon County is also excited about the prospects of young players who could make an early impact in the program. The Lions have enjoyed a productive off season and are looking forward to challenging in the tough District 8-AA. How well the team is able to gel and play sound baseball consistently will dictate the season.