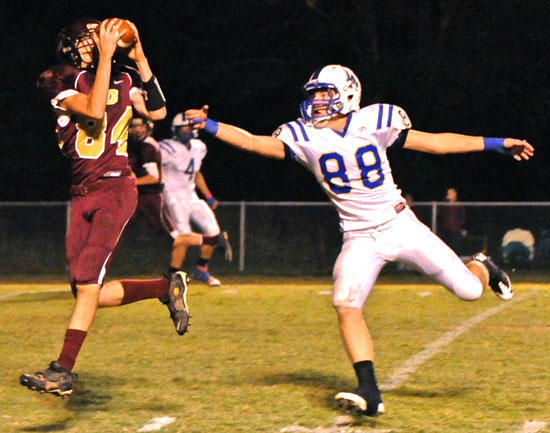 The Wildcats are contending for the District 8-AA Championship while the Lions are still looking to secure their first win; however, the recipe for upset became even more difficult when Livingston Academy was clicking on all cylinders.

Quarterback Brock McCoin threw for four touchdowns and ran for two more as Livingston Academy put together its top offensive output in more than 40 years to beat the Lions, 62-16. The Wildcats rolled up more than 500 yards total offense and their point total the most since they scored 82 in 1969.

“McCoin is an outstanding player and he had a great game tonight,” Cannon County Head Coach Joel Schrenk said. “Livingston’s offense has a lot of weapons and they were on their game tonight.”

Cannon County (0-7, 0-3) put up more than 300 yards total offense – all through the air – to try to stay within reach early. Quarterback Ryan Jordan was 23-of-41 for 302 yards and two touchdowns. He also threw for two 2-point conversions.

Jordan connected with six different players for receptions, led by Waylon Sedtal, Cody Petro and Justin Tobin. Sedtal had his best game of the season, hauling in six receptions for 63 yards, including a 17-yard touchdown reception. He also caught two 2-point conversion tries.

Petro continued his strong season with six receptions for 74 yards, including an acrobatic 30-yard catch where he went over the defender and wrestled the pigskin away in the end zone. Petro also forced a fumble. Tobin also continued to impress with five catches for 72 yards. Justin Weaver, James Purvis and Hawk Love also had receptions for the Lions.

“Our receivers had a good night,” Schrenk said. “Ryan Jordan threw the ball well and the offensive line gave him time to operate back there. I thought the receivers made some tough catches and did a good job of picking up yards after the catch.”

Livingston (6-1, 2-1) jumped out to a 14-0 lead but the Lions tried to stay within reach early. Jordan’s 30-yard touchdown pass to Petro, followed by Sedtal’s 2-point catch pulled the Lions to within 14-8 in the first quarter. The Wildcats answered and eventually stretched the lead to 27-8 by the end of the first quarter.