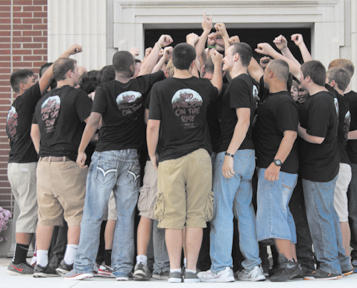 TONY STINNETT photo Cannon County football players huddle up for a cheer after being introduced during the annual BBQ Bash on the Square Friday (Aug. 9).

Cannon County’s football coaching staff will be putting more emphasis than usual on the team’s final two scrimmages this week.

The Lions had scheduled scrimmages at Shelbyville and Huntland canceled this preseason so they go into the final week of training camp in dire need of on-field work against someone other than themselves.

“We are ready to go play someone else and hit against other teams instead of our own teammates,” said senior B.J. Daniel. “We are anxious to play against someone different and see how we do, and how our offensive and defensive schemes work against another opponent.”

Cannon County was scheduled to scrimmage at Sale Creek Tuesday (Aug. 13). The Lions will face Cornersville in the Marshall County Jamboree Friday (Aug. 16) in their final tune-up before the season opener at Middle Tennessee Christian, Aug. 23.

The Lions will face Cornersville in one half of action, but first-year Cannon County Head Coach T.J. Daniel says it will be an important half of football.

Rain forced the cancellation of last week’s scheduled scrimmage at Huntland. The Lions also had a scrimmage against Shelbyville cancelled.

This will be the final week of preseason practice. Next week the Lions begin preparing for their opener against MTCS.

“We feel good about what we have been doing and the offense and defense we are running, but you always want to get a chance to scrimmage in the preseason so you know where you stand and where you need to improve,” senior Dalton Ryan said. “It’s been frustrating not getting to play the scrimmages but it has given us more time to practice and get better at what we are doing so I guess that’s a postive.”

The Lions and their coaching staff feel good about personnel and positions; however, Cannon County has yet to work against another team in full-scale drills or scrimmages so Coach Daniel is still waiting to see who will make the plays and execute when the lights are beaming brightest.

“We have done some good things in practice and we have executed our plays and schemes well for the most part,” Coach Daniel said. “That is encouraging but we all know you have to be able to do it when the lights are on and people are flying at you looking to disrupt the play. We need to get into scrimmages to see who is going to rise up and be ready to make plays and execute in the games.”

A positive for the Lions have been their numbers.

Cannon County has in excess of 40 players out for football this fall; however, as few as 23 were involved in practices last week due to injuries, bumps and bruises.

“We have more kids out for football and that’s a good thing but we have had limited numbers in terms of practice last week because of some injuries here and there,” Daniel said. “We have some kids that are fighting through fatigue and bumps and bruises. You expect some of that at this point in camp but we need to get healthy soon with the season ahead of us.”

Coach Daniel said improved numbers should enable the staff to rotate more players and keep fresh bodies on the field.

“We are hoping to not have so many players having to play both ways,” Coach Daniel said. “There are times it may not be possible but our goal is to not have to play as many both ways. We will know more when we get to see players in live action.”

Ready or not, live action is just around the corner.