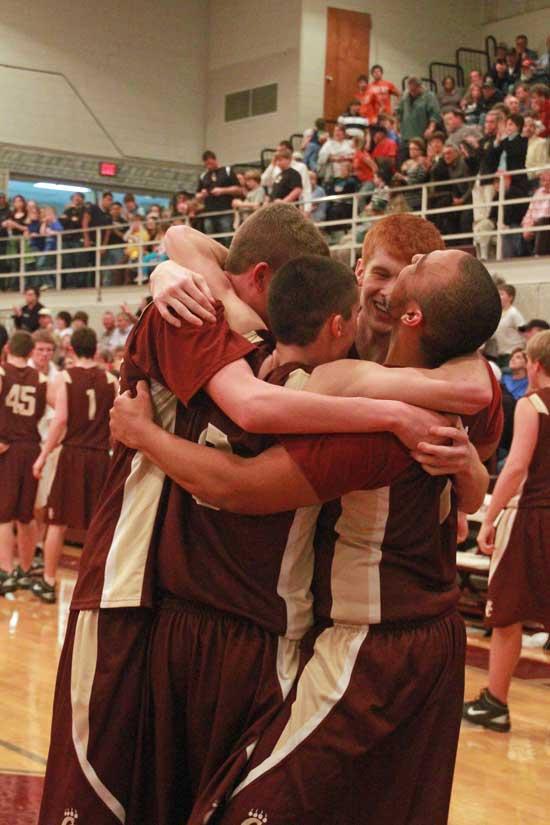 The Lions (22-12) will face Livingston Academy (21-11) for the Region 4-AA Championship Thursday at 7 p.m. The Wildcats advanced on a 3-point buzzer-beater against Upperman in double overtime.

It is the Lions' sixth appearance in the title game and first since 2000. The win also clinched a berth in the TSSAA Class AA Sectionals and left the Lions as one of 16 teams still vying for the state title. Cannon County will face either Tyner or Howard in a Sectional game Monday. Thursday's outcome determines whether the Lions host or travel.

"I love all those (DeKalb County) guys but this is a big rivalry," said senior Justin Davenport, who secured a double double with 28 points and a team-high 11 rebounds. "This rivalry has been there for years and years so it feels good to beat them. We were just thinking about how embarrassing it would be to lose to our rivals to end our season on the bus coming over. Not just lose to them but have them put us out, end it all. We refused to let that happen."

The only way a game between the rivals could be bigger than meeting in the region semifinals with a berth in a sectional or elimination on the line would be in the state title game, and fans from both communities appeared to realize the significance of what was at stake in Sparta.

A standing-room only crowd packed Roy Sewell Gymnasium to watch the rivals battle for survival.

Cannon County relied on continued balance within its deep squad. Davenport led the way with another refuse-to-lose performance. The 28 points represented the 11th time this season he has scored 25 or more and extended his streak of consecutive double-figure scoring games to 40. It was Davenport's eye-popping 11 rebounds and five assists that completed one of his best games in a season of numerous noteworthy performances.

Cody Ruehlen continued his outstanding region tournament with 18 points and was a driving force that helped distance the Lions early. Brian Cripps had his best game since returning for the postseason after missing five weeks at the end of the regular season due to an illness. Cripps had 13 points and four rebounds, and Jared Nave added 11 points and five rebounds. He was limited due to early foul trouble. Colin Jones had six points - consecutive 3-pointers that broke the game open late in the third quarter.

"We have kids who have been through the tougher times so this is great for them," Cannon County third-year Head Coach Matt Rigsby said. "These seniors progressed and bought in early and they have achieved some things along the way. This helps validate all of the hard work. I'm proud of every one of them."

Cannon County was able to get the tempo to its liking early and rattled off 22 first-quarter points and led 22-15 after the frantic first quarter. Davenport scored 10 of his 28 in the first quarter and Ruehlen added eight to key the early surge and help the Lions shoot 70 percent (7-of-10) to start the game.

Cannon County held DeKalb County (23-8) without a field goal for the first 6:36 of the second quarter. The Tigers were 0-of-8 from the field, 1-of-4 from the free-throw line and guilty of three turnovers to start the quarter. Sonni Young's short jumper with 1:24 remaining provided the first of only two field goals for DeKalb County in what proved to be the decisive quarter as the Lions extend their lead to as many as 19 (36-17) and led 38-22 at the half.

"We turned it up defensively but kept attacking offensively," Cripps said. "It means a lot to win this game and do something that has not been done by the men's basketball team in a long time. I'm not a big fan of DeKalb County so it was pretty for me to beat them."

Cannon County appeared to be rolling comfortably along when Jones connected for his second straight 3-pointer to complete a barrage of three straight 3-pointers and send the Lions into the fourth quarter on a 12-0 run and 56-34 lead.

"We have been working hard to reach this point and it feels good to finally fulfill what everyone told us we could do," Jones said. "The team has worked hard and (when I hit those shots) it was just one of those things of being a senior and doing what you need to do to help your team win. We have a lot of people who contribute and that makes us a tough team."

Just when the Lions were starting to feel good the fourth quarter arrived.

DeKalb County put together a furious rally and cut the lead to seven, 68-61, with 1:58 remaining, but Cannon County knocked down 10-of-11 free throws down the stretch to secure the win.

The Tigers were led by Destry Wiggins with 20 points and Dylan Roller with 18.

Print
Members Opinions:
Sarah
[Delete]
Welcome to Woodbury Mr. Tony Stinnett....We wake up jump on the computer and there YOU ARE posting THE score about our boys and you posted at 4:11AM and it is 6:39AM now........THANKS TO YOU AND YOUR GREAT WRITING......Sarah Womack
titleist1
[Delete]
This was most deserving to a bunch of kids whom I've grown to know and love over the past couple years. This is a special bunch (seniors) who have worked hard for a common goal, but the job isn't done, let's get to state!
Jen
[Delete]
I agree with Sarah....I love reading the sports stories. Way to go Lions AND Lionettes!