Lions Let One Slip Away 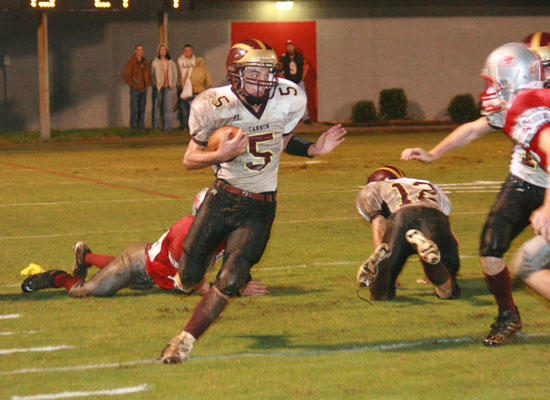 Cannon County Lions made the long trip to Scott County to face the Highlanders. A heavy rain, prior to the game, made the field very difficult to play on.

The Lions started the game with a 95-yard kickoff return by Daniel Woodin for a touchdown. Cannon Co. appeared to have things under control when they went up 14-0, but a determined Scott County team fought back to run off 20 straight points to take a 20-14 non-district win.

The Lions second touchdown started with a Damon Collette interception at the Scott County 27 yard line. QB Lee Cooper hit Andrew Woodin for a touchdown putting the Lions up 14-0.

The second quarter saw Scott County move the ball down the field behind a very effective running game. Missed tackles by the Lions put the Highlanders in scoring position at the 15 yard line where they ran it in for a touchdown, and with the extra point, cut the lead 14-7.

Cannon Co. had a final chance to score late in the second quarter when a Scott County punt went out of bounds at the Highlander’s 25-yard line. The Lions were able to move the ball down to the 13-yard line, but the 9-yard quarterback sack and incomplete pass on fourth down gave the ball back to Scott County as time ran out in the half.

The second half saw the Lions continue to be ineffective offensively and defensively.

“We made adjustments on the sidelines, they just didn’t transfer to the field,” Cannon County Head Coach Joel Shrenck said,

Scott County continued to grind the ball down the field behind their very effective offensive line and their elusive running back and quarterback. Scott County managed to end the third quarter with an 8 yard touchdown pass to tie the score 14-14.

The Lions finally appeared to get on track offensively midway through the fourth quarter. Going for a first down on a quarterback sneak, Cooper fumbled the ball after a hard hit to the head. The Highlanders recovered at their 48 yard line and proceeded to move the ball down the field ending with a 4-yard touchdown run. Scott County went up 20-14 when the extra point kick went wide right.

With Cooper on the sidelines, the Lions were unable to move the ball against the Highlanders, and the incomplete pass on fourth and long ended the Lions hopes of pulling out a victory.