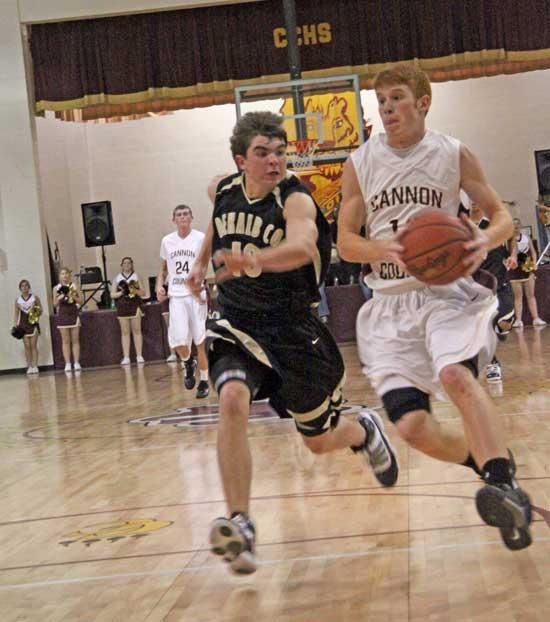 Colin Jones drives past a DeKalb County defender on his way to a layup against the rival Tigers.
Brian Cripps quietly does all the little things that make the Cannon County boys basketball team successful but sometimes his contributions go unrecognized by fans who fail to appreciate how much hustle and effort equate to victory.

It was hard to overlook Cripps' effort in a hard-fought 72-67 win against rival DeKalb County in front of a standing-room-only crowd at Robert A. Harris Gymnasium Saturday. It was the District 8-AA opener for both teams.

Cripps scored nine of his season-high 14 points in the fourth quarter and also added four steal, while creating additional opportunities with his all-out effort that led to many loose ball possessions for the Lions (7-1, 1-0).

"That effort is the way I get playing time so I have to hustle every play," Cripps said. "It felt good to play well in this game. I always like beating DeKalb more than any other team. They are the biggest rival so it always feels good to beat them."

If it's possible to have a quiet 25, then senior standout Jared Nave did. It was business as usual for Nave, who continued his outstanding season with a game-high 25 points on 11-of-15 shooting. He narrowly missed his third double double with nine caroms. The high-scoring Nave led four Lions in double figures. Cripps and Colin Jones each had 14, and Justin Davenport finished with 12 points and five assists.

Cripps was at his best under pressure with the game on the line. The senior guard scored nine of his 14 points in the final 2:57 after DeKalb County had rallied from a seven-point deficit to take a 58-57 lead on Cody Puckett's 3-pointer with 3:39 remaining.

Cripps was 7-of-8 from the free-throw line during that stretch and sealed the win with two successful charity tosses with 15 seconds remaining to give the Lions a 72-67 advantage.

"I can't say enough about (Cripps)," Lions Head Coach Matt Rigsby said. "He takes charges, gets offensive rebounds, makes hustles  plays; that's why he is on the floor. The novice fan probably does not realize how much he means to our team and how much he does night-in, night-out, but we do. I'm so proud of Brian."

Fans arrived early to assure themselves a seat for the anticipated rivalry. They were not disappointed. The back-and-forth game saw Cannon County build two seven-point leads in the third quarter, following Nave and Jones baskets, respectively. Jones' layup with 49 seconds remaining gave Cannon County a 53-46 lead and the Lions forced a stop and set up for the final shot of the quarter.

Jarrett Melton's errant shot came with five seconds remaining. Puckett set the stage for a frantic finish when he grabbed the rebound and heaved a desperation shot from 55 feet that found the bottom of the net to pull the Tigers (5-2, 0-1) to within 53-49.

"We knew DeKalb was going to make another run," said Jones, who connected for three 3-pointers in the win. "DeKalb always plays their best game against us, and they played a good game tonight. They are not going to let up. We just buckled down and made plays."

The Lions started the final quarter slow. Nave's two field goals in the first 5:03 of the fourth quarter was Cannon County's only points during that span, during which time DeKalb County whittled away at the lead before capping a 10-4 run with Puckett's 3-pointer to take a 58-57 advantage with 3:39 remaining.

Cannon County demonstrated great poise under pressure and regained the lead for good on the next possession when Cripps took a nice wrap-around pass from Jones in the lane, finished the layup, drew the foul and converted the three-point play to give the Lions a 60-58 advantage with 2:57 remaining.

"Our kids kept their composure in that atmosphere and that environment and you have to do that if you want to win," Rigsby said. "We have a veteran team so it was good to see them step up and handle themselves the way they did."

One of the biggest pressure-packed moments followed. After Cannon County forced a stop, Cody Ruehlen was fouled hard and had to leave the game. Sophomore Zach Higgins came off the bench to shoot the one-and-one. Higgins stepped to the line in a two-possession game with a packed house watching intently and calmly sank both charity tosses to provide a 68-61 lead. DeKalb County got as close as 70-67 with 18 seconds remaining but Cripps knocked down the final two back-breaking free throws. The Lions were 17-of-21 from the free-throw line in the game, including 9-of-10 in the fourth quarter.

"(Higgins) played a great (junior varsity) game today and I had a hunch he would step out there with that same confidence," Rigsby said. "He hit two absolutely huge free throws in a big situation so I'm really proud of him."

The game got off to a vigorous start with the teams combining for 42 first-quarter points. They were tied 21-21 at the end of the first frame. Jones' hot hand from beyond the arc helped trigger the Lions' early run. Jones knocked down two of his three 3-pointers in the first quarter and connected on three of his first four. Davenport and Nave knocked down consecutive third-quarter 3-pointers to extend Cannon County's lead to six midway through the frame.

The Lions play at Warren County Monday at 7:30 p.m.

Print
Members Opinions:
cb4ut
[Delete]
Congratulations Coach Rigsby, staff, and players - that was by far one of the most exciting basketball games I've ever watched. GOOD LUCK the rest of the season !!!! Go Lions !!!!!
jubba
[Delete]
And some of us remember all to well Coach Rigsby shining on this same floor in his days of playing for CCHS........and now he is doing a GREAT job leading this players.......Go Lions,,,,,,,,
jar2h
[Delete]
Good job old man. You must be a good coach.
CCAC
[Delete]
Rigsby was a great leader as a player and now as a coach!!
jar2h
[Delete]
Dekalb is terrible though. Good luck the rest of the way
[Delete]
That game was so well worth the money, what a game!!!
CCAC
[Delete]
Yeah maybe they are jar2h but its a win! They'll get better from it!
jar2h
[Delete]
That is true they won't get a test til the district schedule starts.