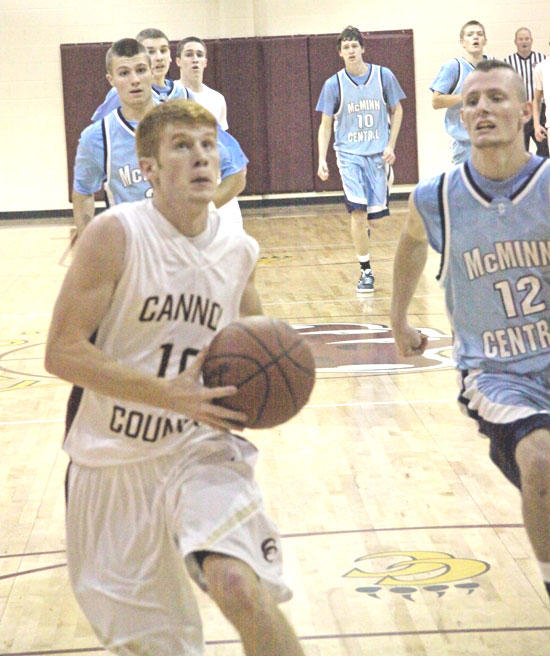 Colin Jones races past McMinn Central defenders for a layup in the team’s 73-57 win Friday night. Jones scored 13 in the victory.

They enjoyed a post holiday feast with a satisfying 73-57 win against McMinn Central Friday night and were scheduled to face Smyrna in the second and final game of the Classic Saturday.

"Anyone on this team can step up at a given time and that's what makes us a solid team," Ruehlen said. "We all got involved (against McMinn Central) and our bench was big. We just came out with a lot of intensity and put a pretty strong game together."

Davenport got the Lions rolling with 16 of his 20 in the first half when he drained three long 3-pointers. He also shared four assists. The electrifying Davenport has scored 20 or more points in five of the team's first six games and tallied 17 in the other.

Nave was a model of consistency as he collected another double double. His 20 points included 10 in each half on 7-of-8 shooting from the field. He also collected 10 caroms and dished out five assists.

Most of Ruehlen's 11 points came at critical stages of the second half but his four steals were as big as they created easy scoring opportunities during the Lions 15-0 third-quarter run to seal the win.

"We made a lot of hustle plays and you need to have those," Cannon County Head Coach Matt Rigsby said. "Our guys are understanding we have to have that intensity and it has to be a collective effort."

Cannon County's plan was to attack McMinn Central with full-court pressure early but foul trouble prevented the Lions from getting into the game plan as quickly as they would have preferred.

The first half was competitive with both teams going back and forth and connecting on big shots. Davenport had his stroke going early, knocking down three deep 3-pointers in the game's first 6:13. The Lions enjoyed a 41-33 halftime edge but the Chargers, who were led by Scott Moses' 22 points, would not go quietly.

They trailed 41-38 early in the third quarter but Davenport answered with a pair of free throws and took a charge moments later that ignited the crowd. Jones followed with a layup and then Cannon County demonstrated why it would have preferred to jump into full-court pressure earlier.

The Lions collected two quick steals that Jones and Nave converted into layups to push the lead back to 49-38 with 5:19 remaining.

Still, the Chargers wouldn't wilt. They made one more modest run to get within seven before the Lions used a furious 15-0 run to close the quarter and take a commanding 64-42 lead. The run was ignited by the Lions scoring eight points in a 53 second span.

Ruehlen's 3-pointer with 3:17 remaining in the stanza started the run. The Lions applied pressure, collected a steal and Ruehlen reached the free-throw line. Ruehlen hit the first and missed the second, but Nave collected the offensive rebound and scored with 2:41 remaining in the quarter. The impressive display of defense and tenacity on the offensive board culminated 17 seconds later with Ruehlen's steal and eventual layup and the Lions were well on their way.

"We did a nice job of getting the offensive rebounds and that created some second-chance opportunities for us, and our defense started forcing turnovers that led to some easy transition baskets," Jones said. "We were able to get good minutes off the bench and as long as we have seven or eight contributing we can be pretty solid."

Cannon County had to have strong bench play with the early foul problems it faced. Heath Simons, Alex Davenport, Justin Tobin and Jared Melton delivered, especially in the second quarter when the game was still on and both teams looking for the first run.