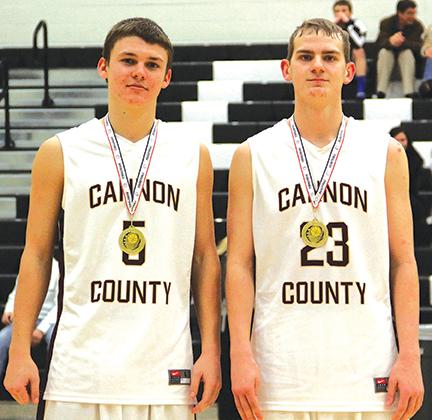 Up eight heading into the fourth period, the Lions surrendered 19 points while only scoring 11 to force overtime.
The Dragons took advantage of the momentum, outscoring the Lions 10-7 and giving Cannon County its first district 8-AA loss.

The Lions (8-3, 3-1) had previously won four consecutive games over the Dragons.

MANCHESTER - Despite only scoring two points in the opening frame, the Lions got off to a good start in the Rhea County Classic with a 53-49 win at Soddy Daisy on Thursday night.

Of the 14 shots taken in the first quarter, the Lions made zero. In the same span, Cannon County turned the basketball over seven times. The lone points came off the bench at the free-throw line from Austin Brock.

The Lions (9-3, 3-1) did their best to make up for it in the second period, scoring 18 points and trimming the lead down to seven at the break.

And then Cannon County started playing some defense of its own, forcing the Trojans to just 2-of-15 shooting, resulting in only seven points allowed in the third.

The Lions would capitalize on their third quarter momentum in the final period, outscoring the Trojans 20-15, and giving Cannon County the final 53-49 edge.

Marshall McReynolds and Jacob Nave led the Lions with 14 points each. Austin Martin finished with 10 points.

CC wins another
close game, 61-58
MANCHESTER - Trailing in the fourth quarter, Cookeville made Cannon County earn their points from the free line in order to maintain a slim lead.

The Lions went on to make 9-of-10 from the charity stripe in the fourth quarter, giving Cannon County the 61-58 win over Cookeville at Rhea County Friday night.

But Cannon County would outscore the Cavaliers in both the third and fourth quarters to give the Lions a decisive 61-58 victory.

Despite loss, Rigsby "proud" with performance

MANCHESTER - Head coach Matt Rigsby is well aware that no team in district 8-AA has the same height or athleticism that Hamilton Heights Christian Academy's international players displayed on Saturday.
His players though, didn't seem to care as the Lions gave the Hawks every bit of effort they had, eventually falling 69-52 in Rhea County.

Hamilton Heights star Abdul Ado, a 6'9, 220-pound center ranked No. 23 on the ESPN 60 junior rankings, was held to seven points on the game.

"Our guys fought, battled, and competed so much in that game," Rigsby said proudly.

In fact, Rigsby was so pleased with his team's competitiveness that he posted the following via his Facebook: "I could not be more honored to say I Coach a group of 15 young men... due to the simple fact they battled as a group the entire way."

Trailing 29-18 at the break, Cannon County (10-4, 3-1) would cut the lead to within two points with three minutes left in the third stanza.
Josh Ruehlen scored 15 points to lead the Lions and Jacob Nave added 13.

Lions finish 3rd
in Rhea Co. Classic
MANCHESTER - Cannon County was playing its fifth game in as many days and its second game of a double header Saturday.

He found out quickly that it wasn't.

Cannon County scored 41 points in the opening half, a tournament-high for the Lions, and finished in third place at the Rhea Co. Classic after its 72-52 win over Rhea County in Evensville on Saturday.