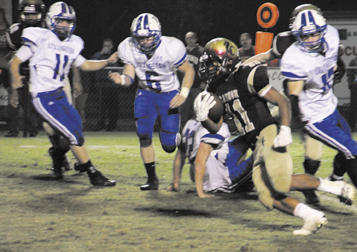 Perhaps the biggest highlight occurred prior to kickoff when Madison Simons was named 2013 Homecoming Queen.

The team rushed onto the field to fireworks and a standing ovation from the home faithful.

Then the game started and the excitement soon fizzled.

Cannon County (1-6, 0-3) fell behind early and never recovered on the way to a 47-0 thrashing by the Wildcats. It was the Lions’ worst setback of the season and the first time an opponent had surpassed 40 points on them this season.

“It was a tough game against a quality team,” Cannon County Head Coach T.J. Daniel said. “You can’t make the type of mistakes we made against a team like Livingston and have a chance to compete.”

The Lions started freshman quarterback Josh Walkup, who had his moments and hooked up with junior A.J. Daniel for several pass completions; however, none reached the end zone.

A.J. Daniel had a solid all-around game, receiving and on defense.

“Josh made some young mistakes but that is going to happen with a freshman,” T.J. Daniel said. “He is going to be a good one.”

The Lions fell behind 14-0 after the first quarter and could never recover. They gave up two more touchdowns in the second quarter and found themselves trailing 30-0 at intermission.

Sophomore Austin Brock had his first career interception, turning back a Wildcat drive inside their 5. Jonathan Smith (one sack), Dalton Ryan, Tyler Slater and B.J. Daniel also had tackles for loss.