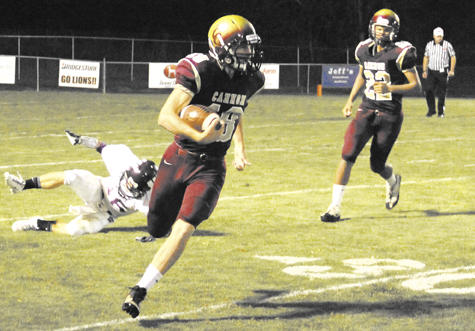 Cannon County’s football team has reached the halfway point of the season following a 21-0 setback against rival Watertown Friday (Sept. 27).

If a grade was given for a mid-term exam the Lions would could be given a ‘C’ for average.

Cannon County’s offense has moved the ball at times only to come up short due to penalties and turnovers. The Lions were shutout for the fourth time in five games against Watertown in the “Mayor’s Cup.”

“We move the ball but we make too many mistakes and that sets us back,” Lions first-year Head Coach T.J. Daniel said.

Friday was a perfect example. The Lions perfectly executed an onside kick, recovered by Wilder Mankin, to start the game. With A.J. Daniel churning out yards behind a determined offensive line, the Lions marched to the Tiger 3, where they faced first down and goal. They had four shots from the 3 and two from the 1. Despite 49 yards from A.J. Daniel on the drive, Cannon County was stuffed at the 1.

It was the closest the Lions came to scoring.

Cannon County’s defense was good enough to keep the team in the game. The Lions’ defense didn’t allow a first-half score. The only touchdown Watertown scored in the first half was a defensive score by Austin Brown.

B.J. Daniel had another stellar defensive effort with double-figure tackles, two sacks and three tackles for loss. Case Isenhart continued to enjoy a breakout season and was a force throughout. Jonathan Smith and Ethan Smith and Dalton Ryan made their presence felt throughout and Austin Brock did a solid job in pass coverage.

Unfortunately, for the Lions, the defense couldn’t score.

“The defense kept us in the game,” Coach Daniel said. “We have to sustain drives and find ways to score.”

Cannon County also had solid special teams play with Smith’s punting and good efforts from Mankin and Jeremy Litchford in the return game.

The game was scoreless until Watertown’s Brown scored on a 23-yard fumble return late in the first half.

Cannon County will face Macon County in a District 8-AA game on the road Friday.