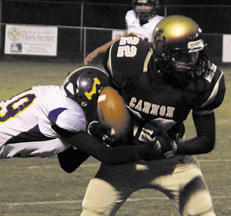 Cannon County put together a solid second half but it wasn’t enough in a 34-2 setback against York Friday (Oct. 25).

Cannon County had opportunities early but turnovers and stalled drives continued to plaque the Lions, who lost starting quarterback Josh Walkup after halftime.

The Lions play host to Upperman Friday for Senior Night. Kickoff is set for 7 p.m. at Schwartz Field.