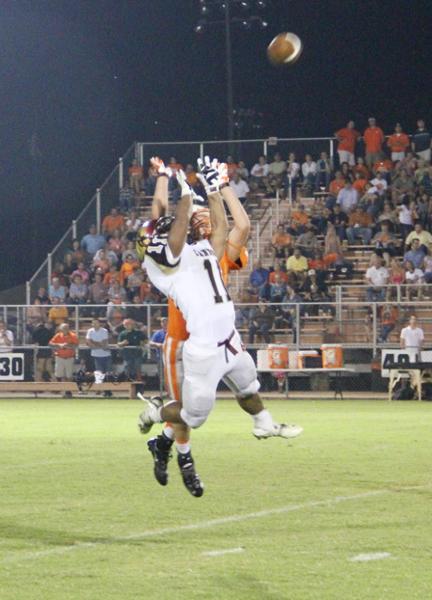 MURFREESBORO - All of the qualities of a competitive football team were on display for Cannon County in the preseason.

The Lions did not reveal those traits in the season opener at Middle Tennessee Christian, falling 33-0, and extending its losing streak to 21 games dating to the 2011 season.

Cannon County gave away four turnovers (two interceptions, two fumbles), failed to get off of the field on critical fourth-down conversions early in the game, surrendered four touchdowns through the air and failed to compile 100 yards of offense.

“Chalk it up to first-game jitters or nerves but we have played much better than this in the preseason,” first-year Head Coach T.J. Daniel said. “We just made too many mistakes to win a football game. We shot ourselves in the foot with those turnovers.”

The Cougars turned all but one of Cannon County’s turnovers into points.

“I just dont’ feel like I played well,” Lions junior quarterback A.J. Daniel said. “We have executed our offense much better in preseason. I let the team down. Put this on me. I will work harder to get better.”

The Lions managed just 97 yards total offense. They had just 28 yards in the first half. Part of the reason for limited yardage was the number of lost-yardage plays (sacks, tackles for loss, fumbles) and another reason was four turnovers.

“The turnovers really hurt,” Coach Daniel said. “We had a hard time blocking them and it is hard to execute your offense when you are constantly behind the chains. We show we can move the football, but we have to start finishing drives.”

The Cougars set the tone on the opening kickoff when they converted two fourth-down conversions - including a fourth-and-4 from its 33.

The conversion kept alive a drive that ended with quarterback Justin Winn’s 4-yard touchdown pass to Peyton Buckner. Most frustrating was that Cannon County had the Cougars fourth-and-4 on the MTCS side of the field twice and allowed them to convert both attempts.

Cannon County got the ball back and immediately marched into MTCS territory behind back-to-back nine-yard runs by B.J. Daniel and A.J. Daniel, respectively. A.J. Daniel’s seven-yard run moved the ball to the Cougar 31; however, back-to-back tackles for losses and a fumble ended the drive.

The Lions failed to cross midfield again the remainder of the half as the Cougars built a 26-0 halftime advantage.
Considering the Cougars scored off of three Lions turnovers and spent a majority of the game on the field, Cannon County’s defense wasn’t all that bad. The maroon-clad defenders allowed just one second-half touchdown and that was following an interception that set up a short field.