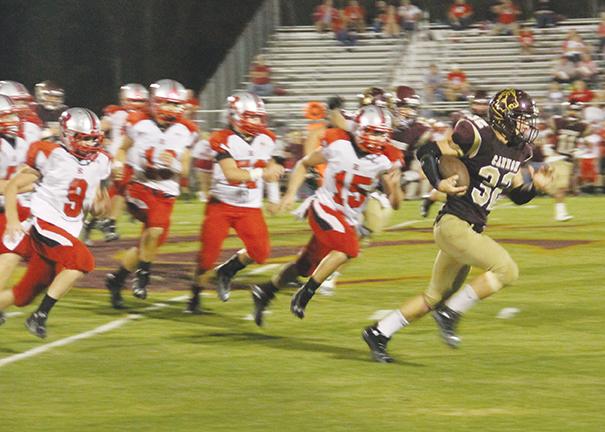 Cannon County was on the threshold of its first victory of the season and on the cusp of ending a 22-game home losing streak until disaster struck against Red Boiling Springs Friday (Sept. 12).

The Lions (0-3) coughed up a 13-point lead and Red Boiling Springs (2-1) scored 14 unanswered points in the game's final four minutes to secure a stunning 14-13 victory at Schwartz Field, extending Cannon County's losing streak to 23 straight there.

The loss overshadowed an outstanding effort from senior Ethan Smith, who rushed for a career high 152 yards on just 14 carries; and sophomore quarterback Jake Walkup, who was making his first career start. Walkup scored both Cannon County touchdowns on runs of 15 and 7 yards.

Cannon County's defense also was superb against Red Boiling Springs' wing-t offense. The Lions forced four turnovers and kept the Bulldogs off of the scoreboard for the 44 minutes of the 48-minute contest. David Fonoti had an outstanding game with eight tackles and a fumble recovery. Defensive back A.J. Daniel was in on several stops, recovered a fumble and hauled in an interception in the end zone to stop a Bulldog scoring drive. Smith was not only an offensive standout, but he also made his presence known on defense where he had two sacks, three tackles for loss and 14 tackles.

Austin Brock also had a fumble recovery. It appeared Brock's turnover would be the dagger for Red Boiling Springs as it came with 9:32 remaining in the fourth quarter and Cannon County leading 13-0.

Cannon County took possession and drove to the Red Boiling Springs 28, where Walkup fumbled to give possession back to the Bulldogs.

The outlook for victory appeared promising for Cannon County for the majority of the game.

The game was scoreless through the first quarter but the Lions took the early lead when the defense came up with a big turnover to give Cannon County possession at the Bulldogs 19. Two plays later, Walkup faked the handoff and ran into the end zone from 15 yards out to give the Lions a 6-0 lead. Walkup added the extra point to push the advantage to 7-0 with 9:47 remaining before halftime.

Red Boiling Springs was driving for the apparent tying score when it faced third-and-6 from the Lions 9. Daniel came up with an interception in the end zone to end the scoring drive.

Cannon County scored its second touchdown early in the fourth quarter, taking a 13-0 lead when Walkup ran in from the 7 with 10:27 remaining. The extra point attempt failed.

Everything seemed to be in the Lions' favor, especially facing a back-up quarterback in Elijah Byfield and a team that did not seem to possess quick-strike ability.

Things looked even more promising when Michael Tirjan fumbled at his own 31 and Brock recovered to set the Lions up nicely.

Four plays later Cannon County fumbled the ball back to Red Boiling Springs. It was the Lions' only turnover of the game but it was critical.

The Lions were unable to get a first down on their next drive and they had to punt to give possession back to the Bulldogs, who took over at Cannon County's 41 with 2:37 remaining. They only needed three plays to go 41 yards and scored on Byfield's 26-yard pass to Tirjan with 1:23 remaining to pull to within 13-12. Instead of going for the tie, Red Boiling Springs pulled out the stops and went for the 2-point conversion and the win.

Byfield ran in for the 2-point conversion to give Red Boiling Springs its only lead of the game - 14-13. The Lions moved to near midfield in the final minute but ran out of time.

Cannon County will look to get into the win column when it opens Region play again.

Print
Members Opinions:
purelife
[Delete]
Feeling it for the players, it was a great effort, they just need to figure out how to finish it!!! Keep your heads up and work hard Friday night . Beat Dekalb!!