Lions Counting On James To Be Difference-Maker 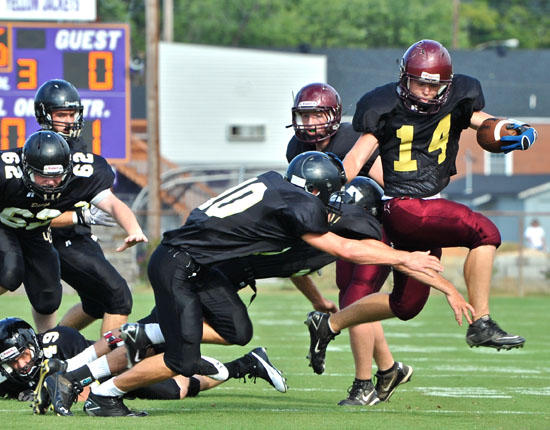 When Brandon James suffered a shoulder injury that prevented him from playing the quarterback position as a sophomore in 2010 it hampered the Cannon County offense.

Seldom do sophomores mean so much to a team but James had won the starting quarterback position coming out of spring practice and was the apparent field general - until the shoulder injury which not only cost him an opportunity to lead the offense, but also kept him off of the field for a period of time.

James, who missed spring practice due to rehab, is back on the field in 2011. He's not projected to start under center but Cannon County fans should be prepared to see the difference he makes when on the field and fully healthy.

The versatile playmaker will play tailback, receiver and could see action at quarterback in certain packages this season and, if the preseason means anything, James is back with a vengeance. He has been a strong threat running the ball and he is outstanding catching the ball and then making defenders miss. The elusive James also adds a different dimension when he's at the quarterback position.

"I've been waiting for this since my surgery," James said. "I feel 100 percent, and I am ready to make a difference for this football team."

James needs to have a breakout season if the Lions offense is going to flourish, but he is not a one-man show. The Lions also will count heavily on sophomore Hawk Love and freshman Jake Hoskins in the backfield. Freshman Jackson Mason also could emerge as a sleeper. Whereas James is quick and elusive, Love is a bruising back with a blend of power and good enough speed to be a strong commodity. Hoskins is a talent, but he also is a freshman playing behind two solid backs.

The Lions go eight deep amongst the receiving corps and there is an abundance of talent within the group and that's a good thing in the Spread offense.

"Top to bottom this is the deepest group we have had," Schrenk said. "We can rotate guys and it doesn't matter who is in there. There have been times that I've had to look at the personnel on the field and then call the play based on who is on the field. With our first eight this year it does not matter. We can call any play with any of those eight out there and we are OK."

Leading those eight is senior Justin Weaver and junior Cody Petro. Weaver hauled in 11 catches for 79 yards in 2010 but expect those numbers to skyrocket in 2011. Weaver has had a strong offseason and is an excellent route runner with above-average speed. Petro will also signicantly improve the group. The Siegel transfer gives the Lions a burner on the outside who can stretch defenses. He also has the ability to turn short gains into big plays. Also expect chief contribution from tight end Waylon Sedtal and Wilder Mankin.

Sophomore Ryan Jordan will be the Lions' starting quarterback. The first-year starter has enjoyed a strong preseason camp and indicated he has the ability to lead the offense. Jordan understands where players are supposed to be in the offense. He has been strong in the screen game and shown an ability to throw the deep ball with accuracy. Jordan does not have to be the difference-maker, but he does have to manage an offense that has the potential to move the ball with consistency.

Cannon County's offensive line must develop throughout the season but the unit has three strong leaders in Thomas Stone, Ryan McLaurine and Dalton Ryan. All three were starters a year ago and bring reliability to the trenches. Freshman Allan Robinson will start at center and sophomore Bradley Gunter will start at a guard position. The cohesiveness and productivity of the offensive line will determine how successful the offense is in 2011.