Lions Club Horse Show: In A Class By Itself 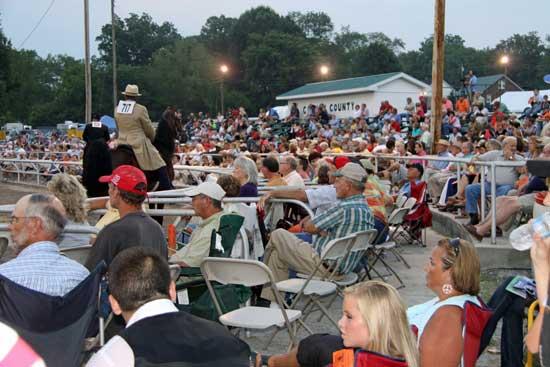 For more than 50 years the Woodbury Lions Club Horse Show has drawn a crowd. Support for this year's event was no different.
Success doesn’t happen by accident when an event is still going strong one-half century after its inception.

In fact, the Woodbury Lions Club Horse Show continues to gain steam more than 50 years after the first event was showcased. Who would have known it would become one of the premier one-night horse shows in the country?

The popularity generated through the Woodbury Lions Clubs Horse Show was on display once again Saturday (July 3) when more than 1,000 patrons, riders, trainers, judges, etc., attended at the Clayton Glenn Champions Arena.

“We are pleased year after year with the support we receive for this event,” said Bruce Steelman, Horse Show Chairman. “This year’s show (had) another strong turnout. This is the primary fundraiser for us and it supports our mission.”

And as the late afternoon turned to evening and the classes began to build in stature, the box seats, grand stands and bleachers began to fill. Clearly, the Woodbury Lions Club’s Horse Show never gets old.

“I showed here last year and won so I’m excited about being back and having another chance,” said 19-year-old Summer Brooks, who hails from Rogersville. She was showing 3-year-old mare, “She’s The Talk of the Town,” in Class 26 (Amateur Riders on 3-year old walking mares or geldings. In fact, she won on the same mare last year in the Woodbury Lions Club Horse Show.

“Winning never gets old,” said Brooks, who also had a World Championship to her credit. “I also enjoy the friendships and meeting different people along the way. It’s more than just showing and it’s a great experience being here.”

Fans always have their favorites and as the evening unfolded it was evident the crowd was building based on the calls for their favorite horse, rider or trainer.

“Even if you didn’t come here pulling for someone in particular you end up picking one and pulling it,” said Wayne Palmer, who traveled from the Chattanooga area for the show. “I have friends in the area so the timing of this show is perfect. We always plan our Fourth of July around this horse show. We see friends, a good show and it’s a great weekend. My family is never disappointed.”

Spending the day talking to various patrons it became rather clear the Woodbury Lions Club Horse Show has a strong reputation in the industry. The overwhelming support reaches much farther than the Cannon County line.

“We came over later in the afternoon this year and I know my husband was not pleased with me because I was rushing him,” said Jackie Goss, a Smithville native who has enjoyed more than 20 Woodbury Lions Club Horse Show. “We still got here in plenty of time just like he said we would (rolling her eyes) but this only happens once a year and I always look forward to it. I’ve seen this show grow through the years and you make a lot of friends along the way.”

And judging from the number of young patrons, ranging from toddlers to teens, perhaps the interest will continue to be passed through generations.

“I started coming to this show when I was 15 and I’ve only missed a handful since,” said Nancy Williams. “Now I always bring my daughter and son and they have enjoyed it through the years. I tell them how my mom started bringing me when I was young and they think that’s the neatest thing. They love the horses and the way the riders look so nice. This show has given my daughter an interest in riding so we have got more out of the show than the fun we have. It’s a great experience.”

From the country ham sandwiches, home-made deserts, hospitality and outstanding entrants into the field, there clearly is something for everyone at the Woodbury Lions Club Horse Show and that is the secret to a successful venture that has withstood the test of time.