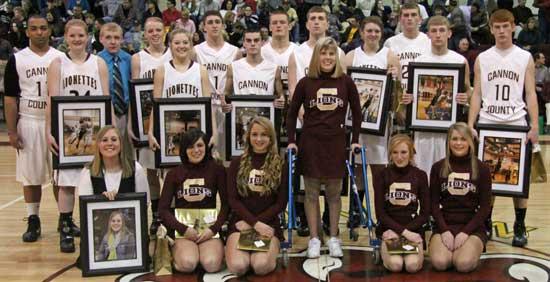 Eight seniors on the Cannon County boys basketball team were determined to go out in style - at least where the regular season is concerned.

The Lions (19-10) clinched the No. 2 seed in the District 8-AA standings and an automatic berth in the Region 4-AA Tournament with a 63-51 win against Smith County that was much easier than the score indicates on Senior Night at Robert A. Harris Gymnasium.

Cannon County stormed out to a 40-13 halftime lead and was never threatened as it dismantled the Owls to avenge an early-season loss and put itself in strong position for the postseason.

Justin Davenport led a balanced Lions attack with 21 points and three assists, followed by Colin Jones with 12 on the strength of four 3-pointers. Jared Nave had his usual strong all-around game with 11 points, seven rebounds and five assists, and Cody Ruehlen finished with eight points and four assists.

Seven of Cannon County's eight seniors scored. The only senior not to score was Brian Cripps, who has missed the last three weeks due to illness. He was put into the game in the waning minutes and had his only field goal attempt rim out. The eight Lions playing their final regular-season home game were Cripps, Davenport, Jones, T.J. Mitchell, Nave, Ruehlen, Simons, and Walkup.

"Those are eight great kids who deserve any recognition they get collectively," Cannon County Head Coach Matt Rigsby said. "I told our kids that while this is Senior Night, I hope it's not the last game they play on their homecourt. We still have a chance to play two more home games and that's our goal. I'm proud of these guys."

"This was a great win for our team because it assures us the No. 2 seed and guarantees us a Region berth," Jones said. "It was Senior Night, but it was also a big district game so this was important to us. To come out like we did against a Smith County team that beat us at their place early, says a lot about the way we are playing now. We had some revenge on our minds because we felt we should not have lost that game at Smith County. It was a team effort and a great win."

Cannon County was never challenged. The Lions led 57-29 after three quarters and the score only became respectable in the final minutes after Rigsby cleared his bench to give his seniors a final ovation as they left the court and gave way to the future of the program.

"We really messed up at their place so we wanted to get that back because we had a bitter taste from that early-season loss," Davenport said. "That first half was one of the best halves of basketball we have played. To hold Smith County to 13 points in a half is pretty strong because they have scorers. We had defensive intensity and ball pressure and that keyed a lot of what we did."

Cannon County will open District 8-AA Tournament action against either Upperman or York at Sparta High School Saturday at 5:30 p.m.