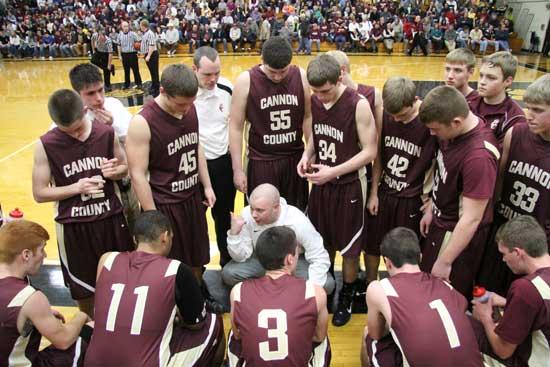 It marked the first time Cannon County's boys swept the season series since 2002-03 - a span of eight seasons.

As Cannon County (13-7, 2-1 8-AA) was taking care of its business on the road, Smith County was dealing Livingston Academy a 52-51 upset to enable the Lions the to move into second in the league standings and just one game behind Upperman in the loss column.

"It feels pretty sweet to come over here and get the sweep," said senior guard Jared Nave, who scored a game-high 24 points on 9-of-12 shooting and added seven rebounds. "That is something that has not been accomplished in a long time. We really had control the entire game."

Justin Davenport also had a strong night with 18 points, seven assists and six rebounds. Colin Jones and Brian Cripps scored eight points each. Cody Ruehlen was a beast on the boards with a game-high 10 caroms.

"It was a solid team win. It's always nice when you can go on the road and get district wins," Cannon County Head Coach Matt Rigsby said. "It is always tough over here so the team played really well and was able to get what we have worked on in practice into the game. That's what we drill."

Cannon County established itself with sound defense. The Lions clamped down in the first quarter and held DeKalb County without a field goal for almost the first four minutes and allowed just two field goals to the Tigers during the opening frame.

The Lions had many opportunities to blow the game open in the second quarter but they were guilty of nine turnovers and allowed the Tigers (6-5, 1-4) to hang around. Cannon County led 27-21 at the half.

"We could have had a much greater advantage at the half," Rigsby said. "We missed great look after great look but part of that's just not playing and some of them not being able to get to practices, but we were getting the looks. Even though we were not scoring our guys made up for it on the defensive end. To hold DeKalb County to 21 points in the half was sound defensive work."

Nave's 3-pointer with 6:41 remaining in the third gave Cannon County a 32-21 lead - its largest of the game. Cripps then won possession of a loose ball on a brilliant hustle play and added the layup to push the lead to 34-21. Davenport answered a Tiger free throw with a 3-pointer to lift the Lions to a 37-22 lead.

Cripps hustled into position and took a charge and Davenport followed with another 3-pointer to keep the Lions' run going. Davenport and Nave combined for 16 points during a 18-4 Cannon County run that ended any doubt of the outcome.

The run was part of a 25-9 third-quarter showcase in which the Lions combined inside-out offense with stifling defense. Heath Simons took two of three team charges during the run and he capped 15-3 run with his driving layup with 53 seconds remaining in the third.

"We turned our defense into offense tonight," Nave said. "We have really put a focus on defense and it showed in this game. We just have to keep that going."

Cannon County's boys will return to action when it faces District 8-AA leader Upperman at Robert A. Harris Gymnasium Monday.

jar2h
[Delete]
Awesome job. Time to go out and play hard Monday night. I still predict district champs for both girls and boys. Upperman will be the measuring stick as usual. It should be an awesome night of basketball Monday! Everybody come out and support Cannon!
[Delete]
Great win for the Lions basketball team and Kung-Fu Rigsby!!!!