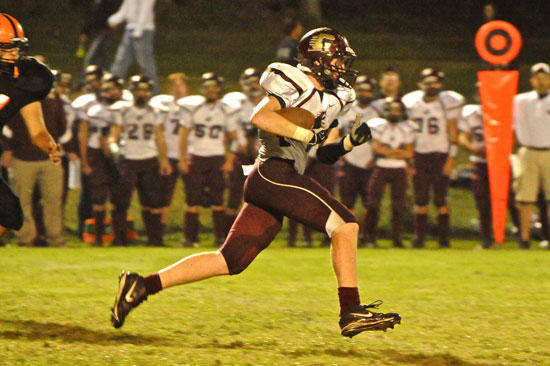 The offense failed to score and managed less than 200 yards total offense. The defense gave up 35 first-half points before settling in and playing much better in the second half. The special teams surrendered a 85-yard kickoff return.

"At this point we are focusing on winning the next play, then a series, and then a quarter and all of the rest of the things will come," Cannon County Head Coach Joel Schrenk said. "We just have to keep building with these young kids and it will be better."

In addition the on-field setback, Cannon County also suffered injuries during the game. Junior standout Justin Tobin was injured taken to the Shelbyville emergency room as a precautionary measure. His outlook is encouraging.

Seniors Justin Weaver and Sean Owen also were injured during the game. Their injuries, suffered in the second half, were not as serious and their status for Friday's Homecoming game against Livingston Academy will be evaluated during the week.

"Doctors felt good about Justin," Schrenk said. "He was bruised up. It was a clean shot on the sideline and just hard-nosed football. (Tobin) is a big part of what we do and we are prayerful he is OK."

Tobin's absence clearly hampered the Lions' offense, which was shutout for the second time this season. Tobin hauled in a 47-yard catch that put Cannon County inside the Champions' 5 before  his injury.

Junior Cody Petro was one of the few offensive bright spots for the Lions. Petro had six receptions for 66 yards. Sophomore quarterback Ryan Jordan completed 11 of his 22 passes for 130 yards. He also threw an interception. Jordan was under duress most of the game as the offensive line provided little time for the signal-caller to operate.

Cannon County managed just 37 yards on the ground, led by Hawk Love's 29 yards on 12 carries. Jordan was next with eight yards on six carries. He was sacked six times and hurried on numerous plays.

Cannon County fell behind 14-0 in the first quarter but had a great chance to get back into the game in the waning minutes of the opening stanza. Jordan found three different receivers as he marched the Lions from their 34 to Cascade's 2. The big play was a 47-yard strike to Tobin to move the ball to the 5. Jordan followed with a 3-yard pass to Weaver, but the Champions' dominated the line of scrimmage on the next play and met Love in his tracks, forcing a fumble at the 2.

Six plays later the Champions scored again to stretch the lead to 21-0.

Cannon County came right back and moved into Cascade territory before Jordan misfired as he was hit, resulting in an interception.

On the other side of the ball, Cannon County gave up too many big plays and was guilty of missed tackles throughout the game.

"We have to be more physical on defense and we have to tackle when we get there," Schrenk said. "We are missing too many tackles."

Cannon County will look to get into the win column when it plays host to Livingston Academy on Homecoming Friday.

choateo
[Delete]
Were you saying that a couple of years ago when this same coach took us to the playoffs?? Our team is young. Give them time. Besides, as long as our kids are having fun and learning something, the "HC" is doing his job. We need to support our Lions AND their coaches. They are already winners, no matter what the scoreboard says. Are you suggesting that winning is the only reason to play? I hope not. What a bad example to set for our kids.
jj54
[Delete]
choateo,thats the loser mentality that has been in cannon for so long and thats the probablem. dont get me wrong heck yeah Im glad the guys can go out on friday nights and still have fun, believe me theres nothing like that feeling.BUT as in any sport you play too WIN! The guys on that team know that and they lay it all out every friday!

redmolly
[Delete]
It does not matter if you win or lose UNTIL you LOSE. Hang in there boys.
joedog
[Delete]
I think its time for a change in the HC situation 2 years of not just losing but not even being competitive its hard not only on the current players but the ones coming up to be the furture of CC football. Let give others a chance to see what they can do not only for the football program but the school.