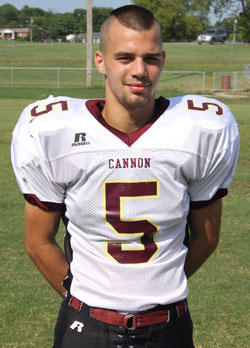 DAMON COLLETTE
Football players at Cannon County still believe the goal of reaching the playoffs for a second straight year is attainable.

And they are right.

The Lions, despite starting the season 0-4, control their playoff destiny because the top two teams in district play are assured postseason berths. Cannon County has a District 8-AA loss to DeKalb County but with four league games remaining the Lions are still in position to assure themselves a playoff spot.

That could all change if Cannon County doesn't find its way into the win column at York Friday. The Lions will be looking to even their district ledger, while York (2-2, 1-0) seeks its third straight win. The Dragons will be playing their fourth home game.

"This is our biggest game so far," junior tailback/linebacker Damon Collette said. "The top two teams in the district are assured of making the playoffs. We have to win all of our district games and it starts this week at York. We haven't given up a bit. We are still working harder and harder each day. We believe in one another, and we believe we can make a run."

There is no reason to write the Lions off just yet.

History, after all, is on their side. This is the point in the schedule where Cannon County turned its season a year ago. Off to a 1-3 start and 0-1 in district play, Cannon County turned back York, 20-14, and went on to win all of its remaining games to clinch a playoff berth. The York win was quite impressive considering the Dragons went on to win 10 games and reached the state semifinals.

"All of the games are important but it is even more so  now that our backs are up against the wall," Cannon County Head Coach Joel Schrenk said. "The one way to guarantee a playoff spot is to finish in those top two spots."

The difficulty facing Cannon County is its longest road trip of the season against a team on the upswing. Still, Schrenk anticipates a hard-fought district showdown.

Cannon County will have its hands full against York's option-oriented offensive attack. The Dragons run behind a veteran offensive line.

Gabriel Walkup has led the Cannon County offense through the first four games, rushing for 370 yards and two touchdowns. Senior quarterback Heath Simons has thrown for 427 yards, and a touchdown. Junior Jordan Linder leads the receiving corps with 11 receptions for 101 yards, followed by Justin Tobin and Collette with eight each.

Walkup also leads the Lions defense with 27 total tackles, including 25 solo, to go with one sack. Zach Osborne is second on the team with 20 tackles.