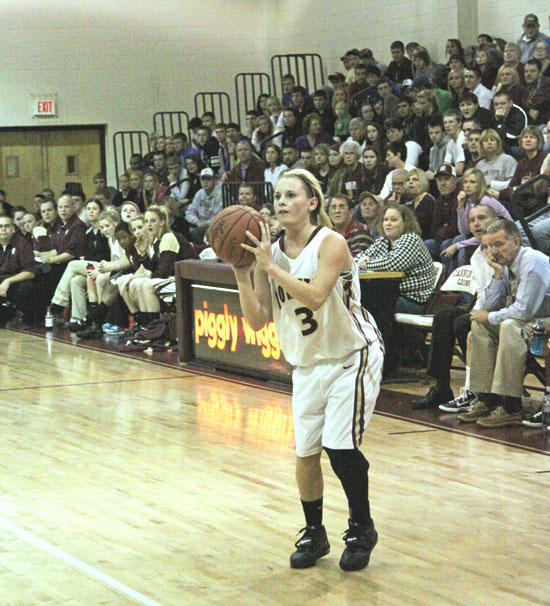 Sophomore Abby Jakes sets up for a long 3-pointer in Cannon County’s 64-55 win against McMinn Central.

Two of the top Class AA teams in the state collided in an anticipated showdown when Cannon County played host to McMinn Central in the Mitch Wilson State Farm Thanksgiving Classic at Robert A. Harris Gymnasium Friday.

True, the game had numerous state-wide implications in terms of an early-season barometer and jockeying for position in the Top 10 polls but revenge was the Lionettes chief motivation in a rematch of last year's Sub-state game in which McMinn Central ended Cannon County's season at Harris Gymnasium one game short of a trip to the TSSAA Class AA State Championships. McMinn Central went on to finish runner-up.

Perhaps the stakes were not as high but the intensity was as the Lionettes (4-1) exacted revenge in a 64-55 win in front of appreciative partisan fans. Chelsey Payne and Emily Sissom led the way with 20 points each, while Taylor King added her almost-expected complete game with seven points, six rebounds, five assists and three steals. Lindsey Reed added six points and five assists.

"It was a huge game for us," Sissom said. "We had a lot of heartbreak last year when we lost to them. We had a lot of revenge we wanted. We had all of that bottled up inside of us and we just let it all out at the beginning. We all really wanted this game."

Whatever the Lionettes had bottled inside of them was released in a rather emphatic manner as Cannon County seemingly shell-shocked the Chargerettes with a stunning 19-4 run in the game's first eight minutes. After falling behind 2-0, Cannon County went on a 12-0 run that culminated with Sissom's clutch 3-pointer from the top of the key with 2:30 remaining in the first quarter.

Cannon County used an 8-0 run featuring a King steal and layup, a deep 3-pointer from Sissom and an Ashley Basham layup in the final 1:53 of the first quarter to stake claim to the early 19-4 advantage.

"We needed that kind of start," Cannon County Head Basketball Coach Michael Dodgen said. "We didn't need anything negative to happen early. "The girls have looked forward to this game since I told them McMinn Central was coming for the (Classic). It was a great matchup and it was a great basketball game."

It was a game played with passion, intensity and desire on both ends but the Lionettes were not to be denied as they answered every challenge and received strong bench play from Basham, Abby Jakes, and JoAnna Young.

Sissom was dynamic, particularly early when she helped separate Cannon County. She scored 16 of her 20 in the first half, including 12 during an exhilerating start in which she connected on 4-of-5 shots.

"I have not been playing like myself early and I've been carrying that on my shoulders," Sissom said. "I knew this would be a really good game for me to come back."

Sissom came back with a vengance. Payne continued to be a big-game player. The senior forward was unstoppable when the game was up for graps in the final quarter. Payne poured in 12 of her 20 in the fourth quarter and missed just one of seven field goals to go along with her seven rebounds.

Then there's  King - the workhorse who is a stat sheet stuffer who continued to be lights out against McMinn Central. Not only did she collected six rebounds, dish out five assists, collect three steals and toss in seven points for good measure, but she came up with big plays in key moments.

Outstanding players usually shine brightest in the biggest moments and the Lionettes demonstrated they have a roster filled with several during their impressive win fueled by emotion.

"They did put us out last year so we had that fire in us to come out and let them know we were ready to play," King said. "Coach Dodgen has said these are two of the top-ranked teams in the state so for us to win sends a message that we are going to be there."

So is McMinn Central.

The Chargerettes demonstrated why they are one of the state's top AA teams with a strong rally that put them back in the game. McMinn Central forced 20 first-half turnovers with the bulk coming during a 21-13 second-quarter blitz that pulled it to within 32-25 at the half.

"When you play a good team like McMinn Central that is so well coached you know they are going to make a run and they did," Dodgen said. "Somewhere down the line, at some point, we are going to see them again if we keep doing what we are supposed to do."

Though McMinn Central put up a valiant fight to get back into the game, Cannon County always had an answer. When the Chargerettes closed to within 32-28 early in the third quarter, Reed provided a crushing blow with a gutsy trey from the left wing.  The Lionettes stretched the lead back to 12, 42-30, with a 7-2 run featuring five points from Payne, who was just starting to heat up.

Payne became a real pain for McMinn Central in the fourth quarter when she scored five points during a 8-2 run. Payne delivered the dagger with a clutch 3-pointer that provided Cannon County a 54-42 lead with 4:43 remaining.

The play was not actually designed for Payne to take the shot but she had a logical explanation for taking the back-breaking shot.

"I don't like to hold the ball too long and get a five-second call and no one was open so I thought (shooting) it was the best option," Payne said. "Coach Dodgen always tells me to shoot that shot so I did."

And for the manner in which she delivered with 12 critical points in the game's final eight minutes?

"I do better under pressure," Payne explained. "I knew we needed those points so I just drove in there hoping to draw some fouls and convert."

The logic worked as Payne converted an old-fashioned three-point play and was 5-of-5 from the free-throw line the final quarter.

Print
Members Opinions:
CCAC
[Delete]
Nice work!!
dailyreader
[Delete]
Keep it up and pour it on! While they won't be saying "Were going to Jackson", we know where this team is headed!

Mr. Stinnett, about as fine of reporting of a game (boys as well) as one could ever expect. While I did not attend, I could feel the excitement of the game just by reading your column.

Ronnie could not hold a candle to you.