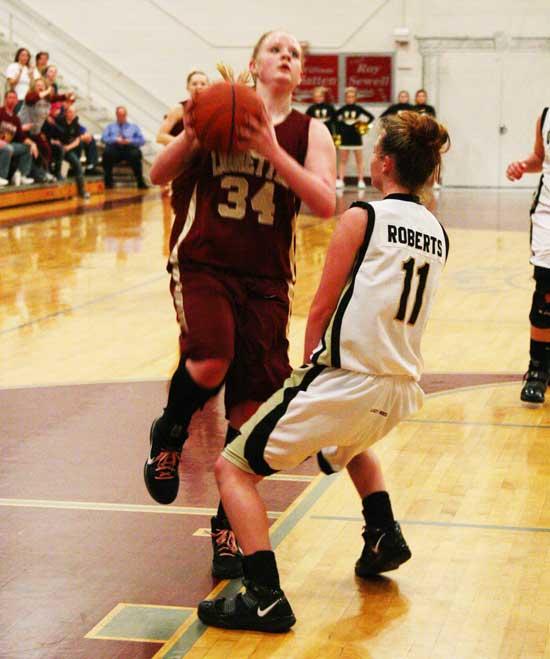 Chelsey Payne drives for two of her team high 22 points. (RONNY BURKS photos)
SPARTA — Cannon County's girls are one win away from playing in the TSSAA State Tournament in Murfreesboro next week.

Taylor King sealed the win with a blocked shot in the closing seconds to give Cannon County the Region 4-AA championship.

The Lionettes will play McMinn Central Saturday night at home in he Sectionals, with the winner going on to the state tournament at Murphy Center at MTSU. Tickets are $7. Gates pen at 5:30 p.m. Game time is 7 p.m.

It was the first win for the Lionettes (27-4) in four tries against the Lady Bees this season.

Cannon trailed most of the game. The Lionettes fell behind 14-5 at the end of the first quarter but battled back to within six at the half, 25-19.

Cannon County made its charge in the third, outscoring the Lady Bees 14-6 to take a 33-31 lead heading into the final quarter. The teams swapped the lead three times in the fourth before ending the period with a 40-40 stalemate.

McMinn Central was a 37-30 upset loser to Polk County for the Region 3-AA title Wednesday. The loss ended a 28-game winning streak for the Chargerettes, who will bring a 29-2 record to Woodbury Saturday.

Polk County will host Upperman in the Sectionals.

Print
Members Opinions:
destin
[Delete]
congratulations...chelsey you deserve your mvp...and to king, sissom, campbell...this years lion team has a well-balanced talent..i'm so proud of you all. thank you for giving us fans a GREAT year...good luck saturday night.....b
Straitupmarilyn
[Delete]
You make us so very proud at CCHS. Congrats.