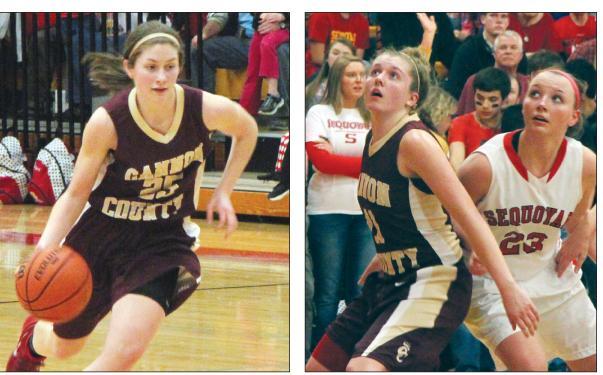 MADISONVILLE - If one didn't know better it was hard to tell Sequoyah was hosting to its first Sectional game when No. 2 Cannon County visited with a state tournament berth on the line Saturday (March 1).

The "Chop House" was filled to the rafters and fans packed into the facility had even spilled along the baseline and into the gym lobby to watch the game. Sequoyah's team was solid, too.

Only thing missing was mystique.

It was in the visitor's locker room.

Cannon County (33-4) broke away in the second half and turned back the feisty Lady Chiefs (22-9), 55-42, to earn a spot in this week's TSSAA Class AA Girls State Tournament at MTSU's Murphy Center.

It is the second straight trip and third in four years for Cannon County. It marks the 12th time a Cannon County team has played in the state tournament.

"It is a great feeling," said senior Madison Walkup, who led the team with 17 points. "We have worked so hard to get back to the state tournament. Now we want to go play well and give ourselves a chance."

MTSU signee Abbey Sissom said the Lionettes were not overconfident about going on the road and securing victory, but they were determined.

"I never doubted my team," said Sissom, who scored 14, pulled four rebounds, provided four assists and collected three steals. "This was not one of our best games, by far, but it's not really about that right now. It's about surviving and advancing."

Going on the road to get to the state tournament is never easy. This trip wasn't either.

The Lady Chiefs put together an ardent effort in front of a boisterous Chop House crowd but it wasn't enough to throttle Cannon County's veteran squad.

"It was a tough environment and we had to battle for four quarters," Lionettes Head Coach Michael Dodgen said. "You wouldn't expect anything else. Give Seqouyah credit. They were playing the underdog role, but I can promise you we were not overlooking anybody. We are happy to get out of here with the win."

In addition to Walkup's 17- and Sissom's 15, senior forward Rebekah Faulkner responded to the big game with a double double in the paint. Faulkner scored 14 points on 6-of-9 shooting and collected 11 rebounds. She scored eight of her 14 in the third quarter.

"It feels pretty awesome going to state three times in four years," Faulkner said. "It is even more exciting this time because I worked so much harder for it than any other year."

Senior forward Macy Clements was her usual solid self and put up workmanlike numbers with 15 rebounds, three steals and three steals to go along with her three points. Kelli Davis added five points and Autumn King provided one.

Cannon County did not have one of its better shooting games. The Lionettes shot 35 percent (20-of-57), including 3-of-12 from 3-point range.

"I thought we left a lot of points on the board missing some easy shots," Dodgen said. "We got the shots we wanted. We just didn't finish them early. That's going to happen some in a game of this magnitude."

The defense was key, though, forcing 17 turnovers. The Lady Chiefs did not shoot like a team in the comfort of their home gym. They were a dismal 28 percent (16-of-57), including 2-of-14 from 3-point range.

One key for Cannon County was limiting Tennessee Wesleyan signee Hunter Simpson to 10 points on 4-of-14 shooting. Teammate Savanna Atchley led the Lady Chiefs with 16.

Cannon County trailed once, 2-0, and had seemingly silenced the Chop House crowd when it went on a run to take an 11-3 lead but the throng got back into the game quickly when the Lady Chiefs closed the quarter on a run to pull to within 16-12. They were even more frenzied when Sequoyah hung around and trailed 26-23 at intermission.

"I think we were ready to play but we weren't hitting our shots and we got frustrated," Sissom said. "We let their crowd get back into it."

The Lionettes were just teasing the home faithful.

They silenced the crowd with a thunderous third quarter that featured a 15-8 run and stretched the lead to 41-31 going into the final quarter.

The Lady Chiefs hit their first shot of the third quarter to pull to within 26-25 but the rest of the quarter belonged to Cannon County. The Lionettes answered Sequoyah's opening basket with 10-2 run to ultimately take complete control.

Sequoyah never got closer than eight points in the final quarter as Cannon County punched its ticket into the field of eight.