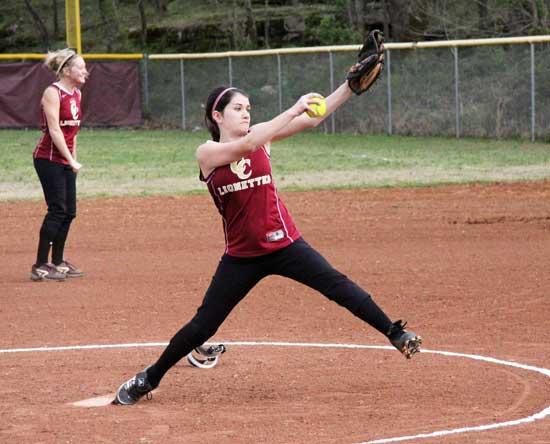 Taylor Nelms pitchers for the Lionettes in recent action.
Cannon County’s softball team is off to a 2-3 start in the early portion of the 2011 season but there are positive signs at the outset.

Although Mother Nature has  been less than cooperative, making getting into any kind of rhythm difficult, four Lionettes are hitting .350 or better. Shelby Jordan leads the way with a .500 average, followed by Emily Sissom (.467), Lindsey Reed (.467), and Brianna Nichols (.353).

Jordan, Nichols and Sissom share the early team lead for RBI with five. Sissom also sports a 2.50 ERA on the mound.

Following is  a recap of the Lionettes’ games through March 31:

“We didn’t play well at all, and we made a lot of mistakes defensively that we usually don’t make,” CCHS Coach Matt Cagle said.

The game was tied 1-1 going to the sixth when Cannon County struck for five runs to go on top 6-1. Jackson County came back with a run in the bottom of the sixth, but Cannon County answered with three in the seventh and captured the 9-2 win.

Sissom scattered four hits and struck out eight batters to earn the game on the mound. The Lionettes needed Sissom’s solid pitching and timely defense as the game was nip-and-tuck in the early and middle innings.

Cannon County was unable to get the bats going in an 11-1 loss to Smith County March 18. The Lionettes managed just two hits with Brianna Nichols was 1-for-3 with a double and Emily Sissom was 1-for-2. Lindsey Reed scored the team’s only run.

Early woes again spelled problems for the Lionettes as Smith County struck for three in the first and added a single run in the second to take a commanding 5-0 lead.

Four players turned in a multi-hit game as the Lionettes rolled past Monterey 12-1. Brianna Nichols and Tessa Resko were 3-for-4 with a double, two RBI and two run scored. Emily Sissom was 2-for-4 wit ha double, three RBIs and two runs scored and Lindsey Reed was 2-for-3 with three runs scored.

Sissom picked up the win on the mound, pitching five innings of three-hit ball. She struck out four.

Watertown gained control with two in the first and maintained it throughout to deal the Lionettes a 5-2 setback in the season opener March 15. Watertown eventually stretched the lead to 5-0 before Cannon County scored two in the seventh to avoid the shutout.

Shelby Jordan was 1-for-3 with a two-run double to account for both Cannon County runs. Brianna Nichols had Cannon County’s only other hit.

Print
Members Opinions:
i.was.here.
[Delete]
Macy Williams should be recognized in the Jackson county game. She hit an in-the-park home run which is virtually unheard of in the high school league.