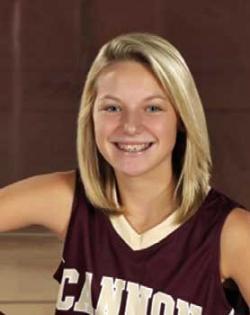 The most recent one counted.

Sissom, a freshman starter on the Lionettes heralded basketball team, connected on a 3-pointer with 18 seconds remaining to give Cannon County a 41-39 lead and the Lionettes went on to secure the season sweep against Coffee County with a 43-39 win in front of a packed Robert A. Harris Gymnasium Saturday.

Sissom also hit a game-winning 3-pointer in a fall scrimmage against Station Camp but nothing was on the line then. The possible outcome of a regular-season game hinged on Sissom's shot after Coffee County had grabbed a 39-38 lead on Kaitlyn Thornton's layup with 41 seconds remaining.

Cannon County (10-1) set its offense in motion with Taylor King penetrating the baseline and kicking the ball out to Young on the wing. Young penetrated and dished to a poised Sissom, who found herself open from 21 feet away and never hesitated as she knocked down the game winner.

"When you have a freshman who is willing to step up and take that shot, the sky is the limit for (Sissom)," said Lionettes Head Coach Michael Dodgen, whose team tasted victory for the fourth straight time. "We needed a game like this. We need to be challenged like that before we get into the meat of our district schedule. I liked how our team didn't panic there at the end after Coffee County got the lead. We came down the floor and did exactly what we wanted to do. We talk about stuff like that every day at practice, being in the right spot when we penetrate and kick, and Abbey was where she was supposed to be."

Sissom, who finished 11 points, also hit a clutch 3-pointer with 4:15 remaining after Coffee County had tied the game at 34-34.

Senior Emily Sissom led the Lionettes with 13 points and also dished out four assists. She connected for four of Cannon County's seven 3-pointers in the game. While the elder Sissom was pleased with her team's overall defensive play and limiting Coffee County to less than 40 points, she was disappointed the visitors were able to dictate tempo.

"We are an up-and-down team and we allowed them to get us into a halfcourt game," Emily Sissom said. "We did not play our game but we also saw that we can win a game like this. Every win is big for us. This is a good win because it showed that at the end of the game we didn't fall apart. We came together and found a way to win."

Sophomore Ashley Basham finished with four points but pulled down a game-high 10 rebounds and Taylor King, who has been sick and missed practices all week, scored four points and had seven rebounds. Her steal and subsequent two free throws iced the game and provided the 43-39 margin.

Several young players and reserves came up big for the Lionettes. In addition to freshman Sissom's 11 points and game-winning shot, sophomore Abby Jakes contributed four points, including a clutch 3-pointer to give Cannon County a 31-26 lead with 2:09 remaining in the third quarter, fellow sophomores Basham and Emily Pemberton, and Young, a junior reserve, provided quality minutes and invaluable contributions.

"Those girls are playing their role and helping this team," Dodgen said. "This is going to make us so much deeper when we do get all of our players healthy. I think we found out some good things about ourselves tonight. We had to dig deep a little bit, and we did."

Cannon County was never able to shake Coffee County and the Lionette lead was single digits throughout. They led 38-34 after Abbey Sissom's 3-pointer with 4:15 remaining and Jakes stretched the advantage to 38-34 with a free throw at the 3:27 mark. Coffee County answered with five straight points to take a 39-38 lead and set the stage for Abbey Sissom's first official game-winning shot.

The Lionettes face Columbia at Robert A. Harris Gymnasium Saturday (Dec. 18) at 6 p.m.