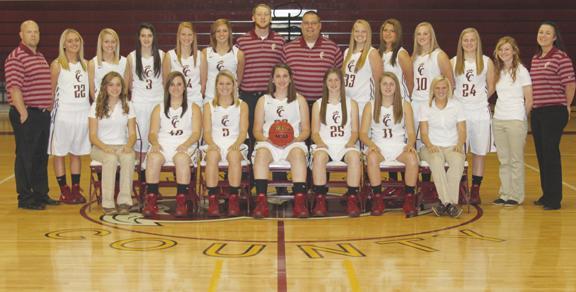 By TONY STINNETT, Courier Sports Editor
Being off for eight days between games was a concern for Cannon County Lionettes Head Coach Michael Dodgen as his team opened play against Lincoln County in the Mitch Wilson State Farm Classic Friday (Nov. 29).

The Lionettes (6-0) made sure he didn't have too worry much.

Seniors Rebekah Faulkner and Madison Walkup were also dynamic. Faulkner scored nine points, collected six rebounds and blocked three shots. She was clutch in the fourth quarter when she knocked down all four free-throw attempts.

Walkup was active and strong defensively while also scoring nine points, collecting a game-high five steals and three rebounds. Senior Macy Clements had another consistent effort and helped control the boards with 10 rebounds. She also had four assists. Erin McReynolds also continued to flourish as a first-year starter. The steady McReynolds scored eight points and had three assists.

"I didn't think we played well in the first quarter and we were stagnant in the third," Dodgen said. "We had not played in eight days and that is not an excuse. I was concerned about the layoff but the girls played well and took care of business down the stretch. The thing about playing a Lionettes---
lot of these games (in Classics) is to prepare for district. We saw (Lincoln County) once on film. You prepare but it's more about you getting ready for that first district game."

For Cannon County that first district game is against last year's Class AA state runner-up Macon County, which was moved into District 8-AA this year. Tipoff for the pivotal early-season showdown is 6 p.m. at Robert A. Harris Gymnasium.

Earning victory against Lincoln County would not be as easy as the score indicated.

The Lionettes built a 24-15 halftime lead but they left a lot of makeable shots on the court, including numerous misfires from point-blank range. Instead of distancing itself from the competition, Cannon County provided a glimmer of hope for the Lady Falcons.

The Lady Falcons trimmed the double-digit lead to one before sophomore Kelli Davis buried a long-range 3-pointer from the right wing to push the lead back to four. It stayed close early in the fourth quarter before Sissom knocked down a clutch 3-pointer and followed it with a driving move to the basket.

Sophomore Autumn King came up with clutch rebounds and deflections to trigger the Lionettes' running game. Sissom was outstanding in the open court and created easy scoring opportunities, including a dazzling finish to Clements. Faulkner was fouled twice on layup opportunities and calmly stepped to the line and nailed all four free-throw attempts.

Before the dust had settled Cannon County had pushed its lead back to double figures and never looked back.

"This team can be a really good team when we want to be," Dodgen said. "We got back to running in the fourth quarter and that opened some things up. Lincoln County is a good basketball team. They will finish in the top three of their district (8-AAA) just because of how hard their kids play. It was a good test for us."