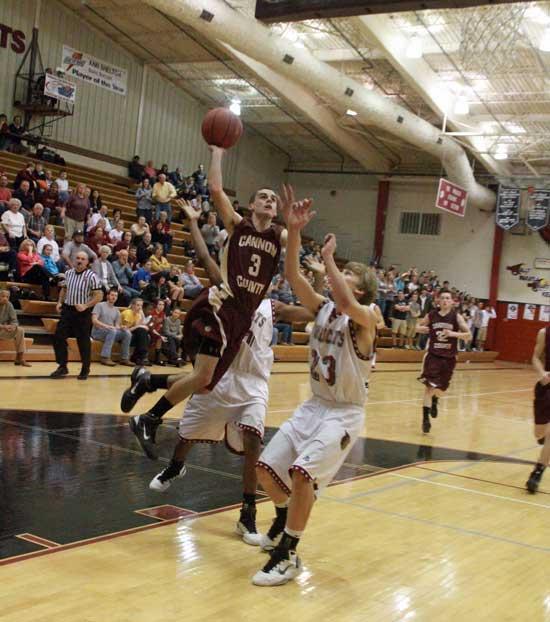 Cannon County Justin Davenport, 3, puts up a one-handed jumper over the defense of Tullahoma's Mike Passarelo. Davenport scored 37 against the Wildcats. (PHOTO BY CANDICE JONES)
TULLAHOMA - Reaching 20 wins is a benchmark for basketball teams and the No. 8-ranked Cannon County Lionettes arrived at the landmark number for a fourth-straight season with a dominating 74-27 road win against Tullahoma Tuesday night.

The Lions were not as fortunate, dropping a tough 67-61 decision to the Wildcats, despite an eye-popping 37-point performance from senior point guard Justin Davenport.

The Lionettes improved to 20-5 with their one-sided win, marking the fourth straight season this senior class has won 20-plus. Senior guard Emily Sissom, a Union signee, led the way with 20 points on 7-of-9 shooting, including 4-of-6 from 3-point range.

Chelsey Payne and Taylor King, also members of Cannon County's stellar senior class, were also strong contributors with 16 and 15 points each, respectively. The starters and top reserves played less than three quarters in the one-sided affair.

"Reaching 20 wins is not huge in the big scheme of what these girls want to ultimately accomplish but it is quite an achievement for this senior class to turn in four straight seasons of 20 wins or more," Lionettes Head Coach Michael Dodgen said. "The biggest thing is we are starting to get some confidence about us. I know some things came to us easy tonight that won't come easy later, but we played well and did things the right way. That's what we are looking for."

The Lions (17-9) were in a catfight from the outset with the Wildcats and carried a 51-43 lead into the final quarter before wilting down the stretch.

Davenport single-handidly kept the Lions in the game with 37 of the team's 61 points. He was 12-of-20 from the field, including 7-of-11 from 3-point range. Cody Ruehlen was the only other Lion in double figures with 14. The Lions were playing without starters Brian Cripps (illness) and T. J. Mitchell (shoulder).

"There's a reason we schedule these games late in the season and there is a lot you can learn from them," Lions Head Coach Matt Rigsby said. "This was a good test for us. I'm proud of the guys and the effort they gave. We just didn't finish it at the end. "

Cannon County will play host to Livingston Academy Friday in two key 8-AA games. The girls game features two of the state's Top 10 teams and the boys game is for the top spot in the district standings with one week remaining. Tipoff at Robert A. Harris Gymnasium is 6 p.m.