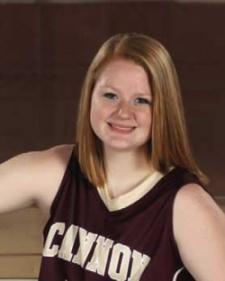 Chelsey Payne
Chelsey Payne was one of the state's best-kept secrets entering the 2010 postseason before going on a seven-game binge that earned her Region 4-AA MVP honors and almost landed Cannon County in the TSSAA State Championships.

The Lionette senior has picked up where she left off and suddenly is gaining respect as a consistent post presence on one of the state's top teams. Payne was at it again during a 64-47 win against Smyrna in the final game of the Mitch Wilson State Farm Thanksgiving Classic Saturday night.

Payne's persistence is a testament as to how players should prepare for when their number is called. She was a reserve throughout the 2009-10 season but when teammate Lauren Ruehlen went down with a season-ending knee injury in the regular-season finale, Payne's number was called. She averaged a double double with 14 points and 11 rebounds in seven postseason games.

Ruehlen, a senior, suffered a setback during preseason practice and will be out until February but Payne continues to fill the void. Including Saturday's charismatic performance, Payne has scored 20 or more in three of six games this season and has accomplished the feat six times in 14 career starts while also serving as a beast on the boards.

She does it for her team - and her friend.

"It's just the want to be out on the floor and not wanting to let Lauren down because she worked so hard for this, too, and I just don't want to let her down," Payne said. "I have practiced hard and prepared even when I wasn't playing so that when I did get the chance I would be ready. My confidence has improved with the playing time. I am more comfortable out there, and I believe I can handle the pressure better now than I could before."

Lionettes Head Basketball Coach Michael Dodgen said Payne's play is starting to benefit the team in numerous ways because she is developing a reputation that makes her part of the opposing team's scout and game plan.

"Chelsey has stepped up and done a good job, especially in big-game situations," Dodgen said. "What she is doing now is opening up a lot of stuff for her teammates. There are a lot of people who will benefit from what she is doing and that's a positive. If people want to focus on shutting down Emily, go right ahead, because we have others to take up the slack."

That was also evident against Smyrna - the third Class AAA victim to fall prey to the Lionettes this season. Payne controlled the paint and was solid on the boards but Cannon County continued to receive strong play from its nucleus.

King joined Taylor with key baskets throughout the second half to derail any Smyrna comeback hopes. They combined for 17 second-half points. In addition to her eight points, Emily Sissom also came up with five steals that led to easy transition points, and Lindsey Reed continued to be quietly assertive with four points, four assists and four steals.

Smyrna, which was led by Antoinette Jenkins and Ashley Kee with 13 each, never really pushed the Lionettes but the Lady Bulldogs also were never out of the game as they lingered around 10-to-13 points after the Lionettes staked claim to an early 13-4 first-quarter lead.

"We were flat, but I anticipated that a little bit after playing such an intense game against McMinn Central (Friday) and then coming back today," Dodgen said. "We did a good job defensively in the first half, especially in that first quarter, and we got what we wanted, which was the win, but we have to continue to improve and be more consistent."

The Lionettes shot 66 percent (21-of-32) from inside the 3-point arc against Smyrna, but they were a chilly 18 percent (3-of-17) from beyond the 3-point line with Abbey Sissom knocking down two treys and Abby Jakes adding the other.

Cannon County maintained its double-figure advantage at the half, 28-17, and carried a 44-31 cushion into the final quarter. Payne scored seven of her 23 at the outset of the final stanza to end any doubt.

The Lionettes return to action against Forrest in Chapel Hill Tuesday before opening District 8-AA play against rival DeKalb County at Robert A. Harris Gymnasium Saturday at 6 p.m.