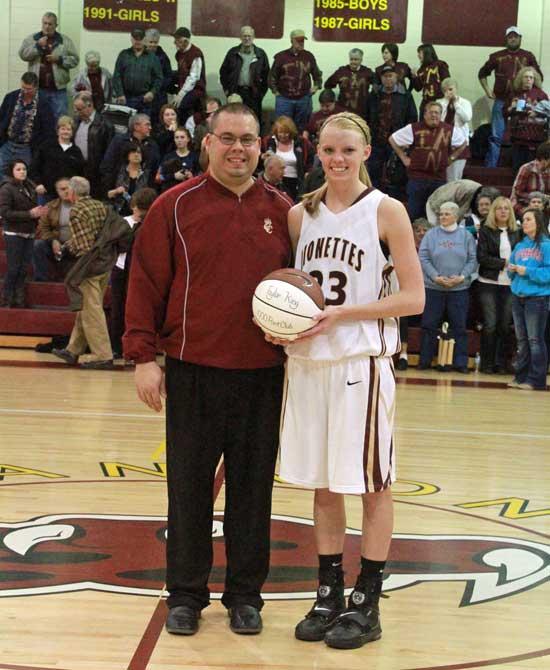 Cannon County Girls Head Basketball Coach Michael Dodgen, left, presents senior Taylor King with a commemorative ball after she became the 21st member of the Lionettes' 1,000-point club Friday. (CANDICE JONES photo).
Had the Region 4-AA girls first-round game between No. 8 Cannon County and Sequatchie County been a boxing match, it would have been called in the first round.

Instead, it was a basketball game and the visiting Indians had to endure all 32 minutes of a 73-44 thrashing administered by the Lionettes (26-7) in front of a partisan crowd at Robert A. Harris Gymnasium Friday night.

Fans began to start filling the gym when doors opened at 5:30 p.m. for the 7 p.m. tipoff. Good thing, too, because had they been late they would have missed the early knockout blow as Cannon County bolted to a 19-5 first-quarter lead and never let up on the way to the one-sided win.

The Lionettes advance to the Region 4-AA semifinals, where they will face District 7-AA champion Grundy County at White County High School in Sparta Monday at 6 p.m. No. 4 Livingston Academy and No. 5 Upperman will collide in the other semifinal at 7:30 p.m. Both are elimination games.

"We definitely wanted to get that first punch in and let them know we are here," said senior Taylor King, who scored 12 points and became the 21st member of the Lionettes' 1,000-point club with a 3-pointer that provided a 32-11 cushion with 1:08 remaining in the first half. "Our defense was a key in this game, especially early. It really got us going."

Cannon County staggered the visitors with a balanced attack that featured five players with nine or more points, led by Emily Sissom's 15 points. Abbey Sissom followed with 13 points on 4-of-5 shooting, King netted 12, and Lindsey Reed and Lauren Ruehlen each scored nine and combined to go 7-of-10 from the field.

But in a game where Cannon County shot 53 percent (25-of-47), including 59 percent (16-of-27) in the first half, it was defense that ignited the Lionettes early ambush. They converted seven first-half turnovers into six easy fast-break points to set the early tone. Abbey Sissom scored the game's first four points and Emily Sissom added the next four. Reed turned a turnover into points to stake the Lionettes to a 10-0 lead.

Key in the early attack were individual superlatives, particularly Reed's smothering defense against Sequatchie County's Melanie Barker, who was averaging 18 points per game but was held to 10 on 4-of-14 shooting from the field. King's effort against Leigh Ann McAfee and Chelsey Payne's mastery of post Alyssa Lawson, along with Abbey Sissom's ability to get into the passing lane and come up with key early steals, fueled Cannon County's fire.

"Before we walked on the floor I challenged the girls to play with intensity and to play hard," Lionettes Head Coach Michael Dodgen said. "We came out with intensity and really just took care of business. When you get to this point the first two games are elimination games so you have to play and play hard to have any chance to get where you want to go. Right now I feel like we are playing some pretty good basketball."

It would be difficult to get an argument.

The Lionettes cruised to a 37-13 halftime lead and increased the margin to 63-28 entering the final quarter before utilizing the services of hard-working reserves for the fourth quarter.

Print
Members Opinions:
mudd
[Delete]
Great Job Lionettes!
susie
[Delete]
Great game! The other article about the Lions' game states that the next Lionette game starts at 7:30pm Monday, however, the TSSAA website says it starts at 6pm. Which is it?
Jen
[Delete]
Way to go Taylor!!!!
housefan1
[Delete]
The girls play at 6PM on Monday night. The boys at 6PM on Tuesday!