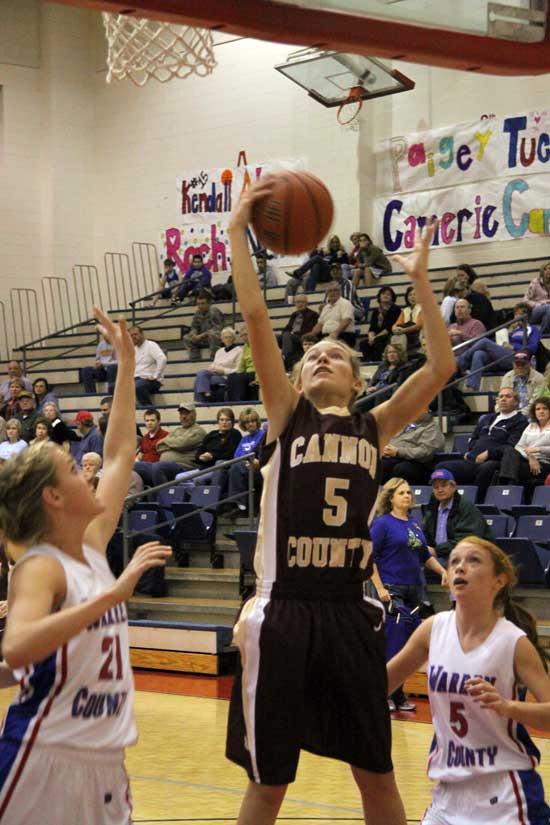 Freshman Abbey Sissom led Cannon County (8-1, 1-0) with 21 points on the strength of five 3-pointers. Big  sister Emily Sissom's 17 points also were triggered by the long-range shot as she ripped the nets for three 3-pointers. Chelsey Payne also reached double figures with 13 for the Lionettes.

Cannon County, regarded as one of the premier Class AA teams in the state, improved to 4-0 against Class AAA competition.

Recent struggles from beyond the 3-point arc seemed to subside somewhat against the Lady Pioneers as Abbey and Emily Sissom contributed for all eight of the teams treys. Cannon County shot 38 percent (8-of-21) from 3-point range.

The Lionettes maintained their early lead throughout the first half and owned a 25-17 advantage at the intermission. Warren County stormed out of the locker room with a 13-4 run to take a 30-26 lead with under three minutes remaining in the third quarter.

Abbey Sissom's fourth 3-pointer of the game pulled Cannon County to within 30-29 with under two minutes to go in the quarter. King's layup put Cannon County back in front 31-30 and Abbey Sissom followed with a clutch 3-pointer to extend the lead to 34-30 at the 1:45 mark.

Cannon County methodically pulled away in the final quarter to secure the non-district win. The Lionettes return to District 8-AA action when they face Smith County in Carthage Friday.

Check out next week's print edition of The Cannon Courier for a complete report of Cannon County's game at Warren County.