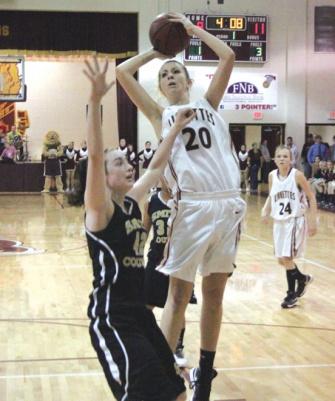 Cannon County had the No. 1 ranking in Class AA in all of Tennessee.

It had a decided homecourt advantage at Robert A. Harris Gymnasium where they were undefeated and playing in front of a partisan standing-room only crowd.

What the Lionettes didn’t have was an answer for Smith County.

“Smith County came in here and earned a district road win,” Cannon County Head Coach Michael Dodgen said. “They didn’t steal it, they earned it. They were better than us tonight. We were good enough but they were better.”

Cannon County’s Abbey Sissom and Smith County’s Callie Hackett, two of the top players in the district, had outstanding games.

Each player delivered clutch basket after clutch basket with a refuse-to-lose attitude. Sissom and Hackett each finished with 25.

It started early when Smith County poured in 21 first-quarter points.

“We just didn’t guard anyone tonight and that’s lack of effort,” Dodgen said. “We have prided ourselves on defense and we didn’t play any (against Smith County). We didn’t get loose balls. We just didn’t have a good enough effort.”

Smith County’s offensive effort was aided by the 21 offensive rebounds the squad was able to pull. The Lionettes gave up too many second-shot opportunities to win agains t a quality team, which Smith County is.

“It’s preparation,” Dodgen said. “We have no excuses. We just didn’t come out and play. They were in a different gear than us. They attacked us early and it never stopped.”

The Lionettes pulled to within 33-32 at halftime and trailed by four, 50-46, entering the fourth quarter.

Cannon County was never able to make a run. Each time the Lionettes hit a big shot, Smith County would counter. The Lady Owls were 4-of-5 from the field in the fourth quarter. Cannon County was 5-of-16.

The Lionettes trailed by two twice in the fourth quarter. Madison Walkup’s layup narrowed the gap to 50-48 to start the fourth quarter and Jakes’ 3-pointer made it 53-51 with 6:16 remaining but they would never get closer the remainder of the game.

What hurts most is dropping a district home game. The Lionettes had secured road victories at Livingston Academy and Murfreesboro Central Magnet, both contenders for the regular-season title.