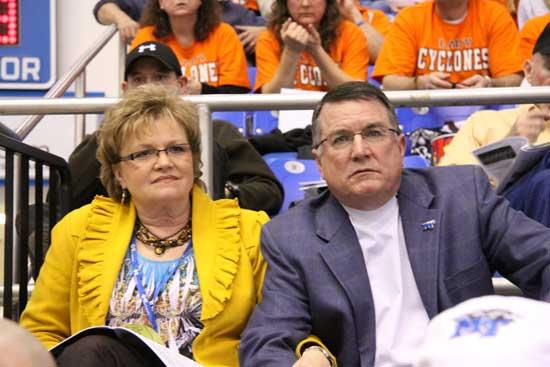 In a short career already filled with memorable wins, No. 200 was a 57-51 triumph against No. 2 Elizabethton in the quarterfinals of the TSSAA Class AA Girls State Tournament Thursday afternoon. It was Dodgen's first game in the state tournament as a head coach.

"It is special to get the 200th win at the state tournament," Dodgen said. "Coaching wins are key but you can't do it without good kids and good players that take care of you and make you look good and these girls have done that for me. Reaching the milestone is special but it is more special to get a win like this at the state tournament with these kids because they are great kids. They really are."

"To get that win with dad in the stands was really special," Michael Dodgen said. "He won 700 games and to (win 200) with him in the stands was great. Dad has always been there when I needed something. It is something I always will remember."

He may remember No. 201 more if it happens against No. 1 McMinn Central in the Class AA semifinals at MTSU's Murphy Center today at 2:30 p.m.

SHINING STAR: Fans attending the TSSAA Class AA Girls State Tournament have the opportunity to watch one of Tennessee's all-time greats. Cannon County's Emily Sissom is Tennessee's all-time leader in career 3-pointers with more than 400 and she also is a member of the program's elite 2,000-point club.

Sissom connected for four 3-pointers in Cannon County's 57-51 win against No. 2 Elizabethton.

COMMUNITY SPIRIT: Cannon County easily had the largest support group of any of the teams playing Thursday.

Lionette faithful flocked to Murphy Center and dominated the crowd with a strong student section and the same community support that has been prevalent throughout the postseason run.

"It was amazing," Taylor King said of the support. "We can't even begin to thank our crowd enough. They filled half of this (arena). They were into the game and so supportive. I want to thank them a lot."

Ruehlen said the sea of maroon was a welcome site when the Lionettes ran out of the tunnel and onto the court.

"It was amazing to walk out of that tunnel and see that," Ruehlen sid. "This has been everything we thought it would be and more, and we want to keep it going. This whole community is behind us and it's been great."

IN ATTENDANCE: Hall of Fame MTSU Women's Basketball Coach Rick Insell and his wife Deb (Spry) Insell, both Cannon County natives, were among the thousands of Cannon County faithful on hand to watch the Lionettes upset No. 2 Elizabethon Thursday. Insell's Blue Raiders are hopeful of an at-large berth into the NCAA Tournament when the field is announced Sunday.

GIANT KILLERS: Cannon County will face No. 1 McMinn Central in the semifinals but facing ranked teams is nothing new to the Lionettes, who reside in a grueling District 8-AA that features three teams ranked in the AP Class AA Top 10.

The Lionettes dealt McMinn Central (33-1) its only loss in a Thanksgiving Classic last November. Cannon County also has wins against No. 2 Elizabethon, No. 4 Livingston Academy and No. 5 Upperman. The Lionettes also earned a win against a Forrest team ranked in the Top 10 in Class A.

NO FRESHMAN JITTERS: It would have been understandable if Lionette freshman point guard Abbey Sissom experienced more jitters than most as a rookie in the state tournament spotlight Thursday.

This time last year she was completing a remarkable run as a grammar school standout at Woodland, where she was County MVP and led her team to the state championship.

Thursday she was starting at point guard against the No. 2 team in the state in front of thousands at MTSU's Murphy Center.

Abbey Sissom may be a freshman in class standing but she played like a seasoned veteran in helping lead the Lionettes' upset. The heralded rookie point guard scored 13 points, dished out three assists, collected two steals and added a block in 28 minutes.

"I didn't know how I would play," Abbey Sissom admitted following the game. "I was really nervous and shaking in the beginning. I had the turnover but overall I think I handled my nerves OK after that."

As impressive as Abbey Sissom was engineering the Lionettes' offense, she was more dynamic in helping slow the Lady Cyclones' offense by controlling stellar senior point guard Kristen Powell.

Abbey Sissom's defense was key in limiting Powell to two points on 1-of-5 shooting and forcing her into four turnovers. Equally important was Abbey Sissom's ability to prevent Powell from getting into the paint and creating opportunities.

"As a freshman in this environment, Abbey did a really good job and she has an impressive future ahead of her," Dodgen said. "She had one bad play the entire game and she took care of the ball against a very good defender in Powell."

OWNING THE BOARDS: Cannon County players combined for a whopping 43 rebounds and won the battle of the boards by 11 against Elizabethon.

"I thought we did a great job on the boards," Dodgen said. "We controlled the boards and that was a key because Elizabethton rebounds it well and they shoot it well so you really want to limit their second chances."

"Rebounding was a big key in this game," Ruehlen said. "We had to block out and keep them off of the boards. I was glad to be able to get some big rebounds because that's what I do. I rebound. That's my role."

Ruehlen also provided seven key points off the bench, the biggest of which came early in the fourth quarter after Elizabethton had pulled to within 37-35.

Ruehlen battled for two offensive rebounds and finished on the third attempt to push the lead to 39-35 with 6:39 remaining. She followed with a layup on the Cannon County's next possession as the Lionettes stretched the lead to 41-35.

ALL IN THE FAMILY: Four Lionettes are following in their parent's footsteps as state tournament participants. Karen (Todd) King, mother of Taylor King, is a former All-Stater who played on the 1988 state runner-up team. Suzette (Armstrong) Sissom, is the mother of Abbey and Emily Sissom, and played on the 1987 runner-up team. Danny Ruehlen is the father of Lauren Ruehlen and he played in the 1985 TSSAA Class AA Boys State Tournament, which is also the last time the Lions reached the boys state tournament.

QUOTE OF NOTE: "The old saying is defense wins games and offense sells tickets. I was here to win a game, not sell tickets, so I just gave it my all on defense." - Taylor King when asked about her strong defense presence that also included eight rebounds and three blocked shots, to go with nine deflections. She scored six points.

CORPORATE SPONSOR: Cannon County business also is a fixture at the state tournament this year. Huff & Puff Trucking is a TSSAA corporate sponsor for the event. The company has a massive banner on a trailer outside the Murphy Center sponsoring high school athletics. Huff & Puff Trucking, owner Bruce Daniel, is a sponsor of Cannon County schools and its sports programs.

Print
Members Opinions:
jar2h
[Delete]
Nobody tell my boss that I will be watching the streaming video of the game today at work...oops
[Delete]
I am right there with ya lol I watched it yesterday! I wish I could be there! Good Luck Girls!
Jen
[Delete]
I think if we can beat them once...we can beat them twice! Go Lionettes!!!
lee99lee
[Delete]
will the game be on t.v.? cant be there but my heart is with those young ladies. goooooooooo CANNON!!!!!!!!!!!!!!!