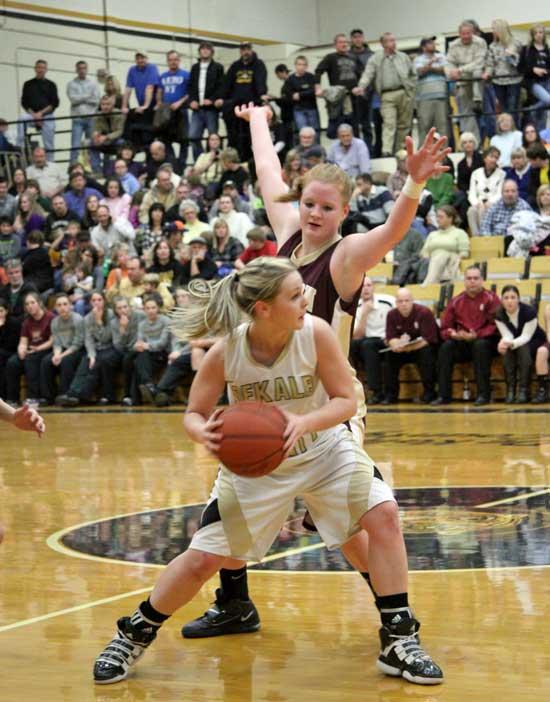 The Lionettes (17-2, 3-0 8-AA) showed no lingering effects of a 10-day layoff since their last game, roaring out to a 24-8 first-quarter lead and coasting to a 47-12 halftime advantage. DeKalb County (11-7, 0-5) is considered Cannon County's biggest rival but the Lionettes have owned the Lady Tigers for more than a decade.

The dominance continued Friday as Cannon County rolled to its 28th consecutive win against DeKalb County - a streak dating to 1999.

"It feels great," said senior Taylor King, who was one of four Lionettes in double figures with 11. "We came out and show them it's really not a rivalry because 28 games (in a row) pretty much speaks for itself."

Abbey Sissom led Cannon County with 13 points, followed by Emily Sissom with 12 on the strength of four 3-pointers. King tallied 11 and Chelsey Payne just missed a double double with 10 points and nine rebounds. Lindsey Reed scored seven in her second game since returning from a back injury. Abby Jakes (6) and Joanna Young (5) combined for 11 points off of a bench that continues to contribute.

The game also marked the return of senior forward Lauren Ruehlen, who had been sidelined with a knee injury since last February.

Lionettes Head Coach Michael Dodgen played his upperclassmen and starters longer than he generally does with a one-sided score but getting players back in a comfort level is paramount with key games on the horizon.

"If we did have an advantage then no matter what the score was my mindset coming in was to let the (starters) play because we had not played in 10 days," Dodgen said. "It is not that you are trying to embarrass anyone but we have to get on the floor and get some rhythm back after being off so long."

The Lionettes picked up where they left off on the way to their 11th consecutive win, combining stingy defense with efficient shooting to stifle opponents. The Lionettes connected on 10 of their first 16 shots in the first quarter and knocked down 53 percent (18-of-34) in the first half. All but four of the 18 first-half shots were assisted.

"We have been out of school and we have not played in 10 days so we were ready to get back in the swing of things," King said. "The last time we played them they were actually winning in the first quarter so that gave us a little fire to come back and get after them early."

They got after DeKalb County early and throughout as smothering defense remained a constant.

The Lionettes had allowed just 17 points through three quarters. They surrendered just three field goals in the first half.

Cannon County will need to continued its outstanding play in a showdown of two of the state's top teams when it faces No. 8-ranked Upperman at Robert A. Harris Gymnasium Monday at 6 p.m.