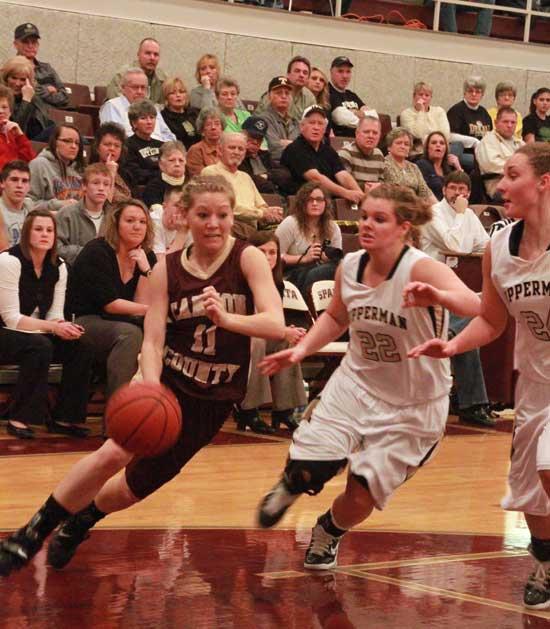 Cannon County standout Emily Sissom, a Union signee, drives past Upperman's Kristin Smith during the District 8-AA semifinals Saturday. Sissom scored 10 points to help lead the Lionettes to an upset victory. (CANDICE JONES photo).
SPARTA - When the stakes were highest and in the most important game to date, Cannon County's players were at their best.

In a showdown of two AP Class AA Top 10 teams, No. 8 Cannon County avenged two regular-season losses with a pulsating 47-42 triumph against No. 5 Upperman in the semifinals of the District 8-AA Tournament here Saturday night.

"It's tournament time and you have to be on your game," senior guard Emily Sissom said. "It's a great win and we hate losing to Upperman so that makes it even better. We had some revenge going."

Cannon County, with a full compliment of healthy players for the first time this season, is gaining momentum at the right time. The Lionettes won their fifth straight and they have won seven of eight.

Saturday's conquest of nemesis Upperman, which had dealt Cannon County a pair of 12-point losses during the regular season, was the most impressive, not only during this run, but also throughout the season.

"I'm proud of every single kid that came on the floor and did something tonight," sixth-year Lionettes Head Coach Michael Dodgen said. "We had some kids step up big time tonight. You can't say enough about this senior group. This was a team win and that's what we needed."

Taylor King led the Lionettes with another stellar performance, captivating a overwhelming strong Cannon County contingent with a double double - 16 points on 7-of-12 shooting and 11 rebounds. Her defense also was stupendous.

Emily Sissom tallied 10 points and sealed the win with her free throw with 17 seconds remaining, and Abbey Sissom followed with 10 points on 3-of-3 shooting from the field. Chelsey Payne pounded in nine points in the paint and yanked down eight rebounds. She also contributed three assists.

And then there was JoAnna Young, whose layup capped an 8-0 run and provided the Lionettes a 44-40 lead with 1:19 remaining for her only field goal, but it was her smothering defense on 8-AA Co-Player of the Year Kayla Biles that proved instrumental down the stretch.

The action-packed battle between state powers was enthralling throughout but intensified during a gripping climax.

The Lionettes had controlled the game throughout but Upperman rallied from a 10-point first-half deficit and owned its biggest lead, 38-35, with 6:12 remaining in the first half.

Things appeared to be coming undone midway through the fourth quarter when King was whistled for a bizarre technical foul and her team trailing 38-36. Biles picked up her third foul on a block against Lindsey Reed attempting to advance the basketball. As King and Reed were celebrating, King was called for a technical for celebrating.

Biles hit both free throws to give Upperman its largest lead, 40-36, and possession.

"When the official went to report the technical I asked the other referee what I didn't wrong and he said he didn't know," King said. "I figured it was one of those junk calls and I just had to let it go."

Its back to the wall and the game hanging in the balance, Cannon County rose to the challenge with its best 4:26 of basketball this season.

The team defense Cannon County exhibited throughout the game resurfaced at the most opportune time and Young proved to be a dynamic stopper down the stretch, not only holding Biles scoreless but denying the ball to such an extent it disrupted the Bees offense.

Cannon County's defense forced five consecutive stops following the technical and converted on the other end each time. The biggest defensive stand was the one that prevented Upperman from building a six- (or seven-) point lead immediately after the technical.

Cannon County scored its third straight field goal when King rebounded her miss and stuck it back in to extend the run to 6-0 and give the Lionettes a 42-40 lead. Her defensive rebound led to Young's layup push the lead to 44-40.

"When you get five straight stops and come down and convert you are going to win a lot of game and go deep in this tournament," Dodgen said. "We got down four and we didn't panic. We played, fought through it, and really played well. Now we have to regroup and be ready to play Livingston Academy 48 hours from now. When you put yourself in position you have to take care of business."

Upperman finally stopped Cannon County's run on Taylor Randolph's layup with 1:03 remaining to cut the deficit to 44-42, but Abbey Sissom came out of a timeout and attacked the basket for a critical field goal to make it a two-possession game, 46-42. Cannon County came up with another defensive stand and Emily Sissom capped the win at the free-throw line.

"We showed as a team we wanted this win and we really wanted it so bad," King said. "We were not going to back down from a four-point deficit. We had worked too hard."

As a result Cannon County will be playing for the 8-AA Championship for the second straight season Monday.

Print
Members Opinions:
[Delete]
Thank each and every one of these girls for the remarkable job they have accomplished. Not only have they shown respect for CCHS but girls,ya'll are such an aspect for the other in our county..God bless each of you in your walk of life. Also, thanks to the parents of these young women::they could not have done it if not for all of you..Cannon county is PROUD !!!!