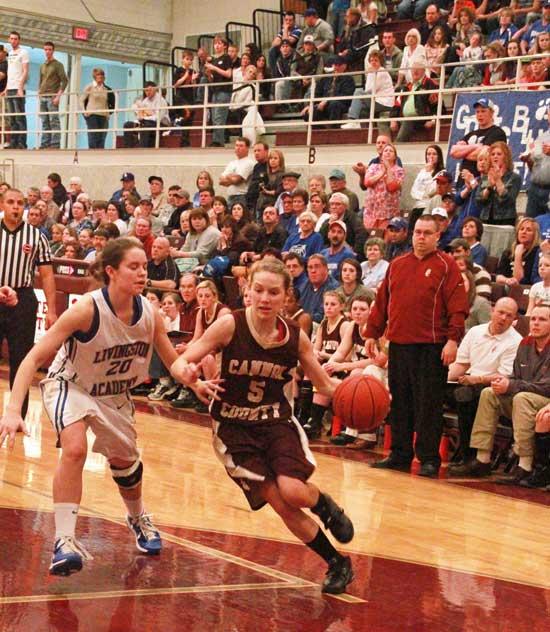 After losing three straight to No. 4 Livingston Academy this season, including last week's District 8-AA Championship on the same court, Cannon County stormed back from 10 down in the final quarter to deal the Lady Wildcats a stunning 54-48 overtime loss and capture the Region 4-AA Championship at White County High School Wednesday.

Lindsey Reed's 3-pointer tied the game, 46-46, with 1:07 remaining in regulation and capped a 14-4 run to erase a 10-point fourth-quarter Livingston Academy lead. The Lionettes continued to dominate in the overtime period.

"We were picked high at the beginning of the year and when we lost a couple of games people started losing faith," Reed said. "We just came out and decided we were going to kick butt in this tournament and that we were going to win it ... and we did."

The No. 8-ranked Lionettes (28-7) became the first Cannon County team to win back-to-back Region championships since 1967-68, 68-69 - a span of 42 seasons. Chelsey Payne also repeated as Region MVP and became the first Lionette ever to earn the honor in consecutive seasons.

"It is an honor to be named MVP, but I really just play for my team," said Payne, who finished with 14 points and eight rebounds. "All I knew tonight was I wanted to win, I wanted that region championship and I wanted to play at home Saturday night."

Cannon County earned the right to play at home in Saturday's TSSAA Class AA Sectional. The Lionettes will play host to East Hamilton with a berth in the TSSAA Class AA State Tournament at stake. Tipoff at Robert A. Harris Gymnasium is 7 p.m.

Livingston Academy will have to travel to No. 1 McMinn Central, setting up a showdown of two of the state's top four teams in the rankings battling for survival.

"It was going to be hard for (Livingston Academy) to beat us four times in a season," Payne said. "We really wanted this. Winning back-to-back region championships hasn't happened here in a long time because this is such a tough region so it's quite an accomplishment and we beat a really good Livingston team to do that."

"This was a total team effort, especially that last four minutes of the fourth quarter and overtime," said sixth-year Lionettes Head Coach Michael Dodgen, who improved to 2-0 in Region 4-AA Championship games. "The girls stepped up and did the things we needed to do. We held that team scoreless for almost 10 minutes in the second half so that was just outstanding effort and defensive tenacity. The girls just dug down and did what they needed to do and I'm proud of them for that."

Cannon County appeared to be the team packing its bags for the dreaded trip to top-ranked McMinn Central after MTSU signee MacKenzie Sells provided Livingston Academy (29-5) a 42-32 advantage with 6:18 remaining.

Things drastically changed in a hurry.

"They are a good basketball team, hands down, but I think what happened is we wore them down," Reed said. "They looked tired. I think we had the drive and motivation to keep going. We have each other's back and when we get going there is no stopping us."

The Lionettes were lethargic at times during the title game but when they awoke, Livingston Academy had few answers.

Cannon County closed regulation on a 14-4 run to force overtime. The Lionettes converted three straight Livingston Academy turnovers into points, including King's driving layup to narrow the deficit to 44-41 with 2:20 remaining.

Sells hit one of two free throws to put the Lady Wildcats in front 45-51 with 1:46 remaining, but Payne was fouled and hit both charity tosses to pull Cannon County to within 45-43 with 1:37 remaining.

Abby Miller drew a foul and went 1-of-2 from the line to push the Livingston Academy lead to 46-43 with 1:20 remaining before Reed converted the shot that ultimately forced overtime, a long-range missile from the wing that found its target and evened the score, 46-46, with 1:07 remaining.

It also capped the scoring in regulation as the two worthy foes battled into overtime.

Reed was outstanding. Along with King, Reed helped provide defense that forced Sells into a 5-of-14 shooting night, including 1-of-7 from 3-point range, but it was also her biggest offensive game of the season that propelled the Lionettes.

Reed was 4-of-6 from the field, including 2-of-2 from 3-point range. She knifed through traffic and converted a driving layup to open overtime. It proved to be the game winner.

"I felt like I needed to stay in my element," Reed said. "Sometimes I try to do things I can't do and I felt like I stayed within my strengths and what I need to be doing in this game. Honestly, a huge motivation for me was not having to ride a bus three hours to McMinn Central."

After falling behind 10 with 6:18 remaining in regulation, Cannon County closed the game on a 22-6 run, including an 8-2 advantage in overtime. The Lionettes held Livingston Academy to 1-of-11 from the field with six turnovers during that stretch and didn't allow a field goal for more than nine minutes.

Emily Sissom sealed the win with four clutch free throws in the final 37 seconds of overtime.

Print
Members Opinions:
awc96
[Delete]
Amazing come from behind win for the Lionettes. Looking forward to the craziness Saturday.
Tony Stinnett is a blessing for the Courier and Cannon County, Thank you for your hard work!!!!!!!!!!!!

Im In Are U???
countrycowgirl
[Delete]
Great Job Lionettes!!! It was an awesome game, one that you never gave up on. When it matter the most is when you dug down deep and came up with the win. CONGRATULATIONS!!!!
jar2h
[Delete]
I was listening on the way home from work and I have to say this team has an ironclad will to win. To be down by ten to a team that didn!t lose a district game is amazing. Great job and bring home a gold ball to cannon county.
lionbasketball
[Delete]
Great job ladies!!!
[Delete]
Congrats Lionettes.
krisandchris
[Delete]
Best C.C.H.S girls team I've seen in a long time! I know it has something to do with their leadership and faith. Lets win State!!
[Delete]
Thanks for your kind words awc96 and others who have also been so nice. I consider myself blessed to have landed here at such a time that I have been fortunate to cover the efforts of an oustanding senior class (girls and boys)that has provided great leadership, and to cover two teams winning at a historical pace. These young people are teaching us more than how to win games, they show tremendous will, character and drive.

If you haven't noticed, and I think you have based on the crowds, these young people and their outstanding coaches also have brought an entire community together through sports.

I'M N ... RU?
[Delete]
Any word on when tickets go on sale for the game on Saturday against East Hamilton?

Also, does anyone know their record?