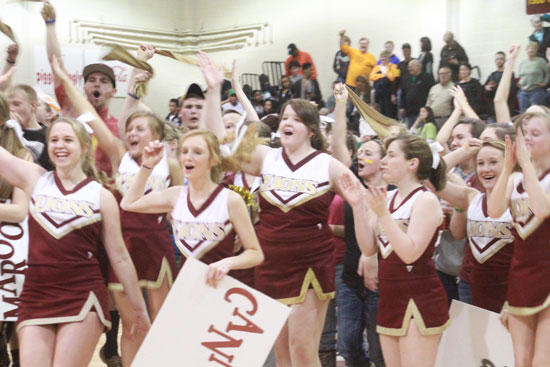 Cannon County is back in the TSSAA Class AA Girls State Tournament for the first time since 1992.

“This is incredible. I am so happy I can’t really describe the feeling,” King said. “Our team worked together and came out and did the job we were determined to do. This is a dream come true.”

The Lionettes reached the Sub-state game last season but fell one win short of their goal of a state tournament berth at MTSU’s Murphy Center – a short 23-mile trip to Murfreesboro.

“We are so excited to get to state,” said senior Emily Sissom. “It feels so good to know that we are going to be playing at Murphy Center (this) week. When that clock sounded and we had won and the students rushed the floor it was still like a state of shock. We worked so hard to accomplish this goal, but we are not finished. We are not just content with getting to the state. We are going there to win it.”

Cannon County will be making its 10th state tournament appearance but first since 1992. The 19-year drought came to an end because of a smothering defense that disrupted the Lady Canes from the outset – and the Lionettes never relented.

The Lionettes were informed of their first-round opponent during a blind draw Sunday at Embassy Suites in Murfreesboro.

“Since March 6 of last year when we lost in this (Sub-state) game, these girls worked their butts off to get to this point and have another opportunity,” Cannon County sixth-year Head Coach Michael Dodgen said. “They wanted another opportunity to get to Murfreesboro and they put themselves in position with hard work. I’m probably as speechless as I can be because I’m so happy for this team. I’m so, so proud of my basketball team. These girls get to realize the ultimate goal of every high school basketball player in this state and that’s to get to Murphy Center for the State Tournament.”

Cannon County forced 17 turnovers, including 11 in the first half, to bewilder East Hamilton. The game was tied 11-11 after one quarter but primarily because the Lionettes could not find their mark early. They shot just 4-of-17 in the opening quarter, including 2-of-11 to start the game, but they also created havoc defensively and forced the Lady Canes into eight of their 11 first-half turnovers in the first eight minutes.

“Our defense definitely kept us in there early,” King said. “We came out with some nerves and jitters and I guess that is to be expected, but when we got through that then we just got after it and played our game.”

Whatever false hopes East Hamilton had of an upset were quickly squashed in the second quarter when the Lionettes effectively put the game out of reach with outstanding defense, crisp passing and making the extra pass to find the open girl, as well as that patented Cannon County defense that has been exceptional during this postseason.

After struggling from the field in the opening quarter, the Lionettes scorched the nets to start the second. They connected on their first six field goals to open the frame and built their biggest lead, 26-14, to that point when Emily Sissom knocked down a long-range 3-pointer.

King started the rout by hitting the first three shots of the second quarter to widen the gap. The second frame clearly was the decisive one of the game as the Lionettes used a 19-1 run to open a 32-14 advantage.

They led 32-16 at halftime after holding East Hamilton to 2-of-12 shooting in the pivotal second quarter.

“We were a little nervous coming out and I think that showed in the first quarter but once we got going in the second quarter there was really no stopping us,” Emily Sissom said. “We knew we couldn’t just show up and win this game. We had to play together out there and we did. I can’t tell you how excited we are.”
Once Cannon County opened its commanding halftime lead there was no looking back. The Lionettes never let up in the second half, building the lead to as much as 30 and maintaining it before Dodgen emptied the bench in the later minutes of the fourth quarter.

“We settled down and did a good job of making that run in the second quarter,” Dodgen said. “I didn’t think we would come out as nervous as we were but that is also to be expected. Once we got past that and started making shots, it was over.”

Print
Members Opinions:
jar2h
[Delete]
cannon-mcminn central in the championship would be epic!!
tnradman
[Delete]
McMinn Central destroyed Livingston, 36-15 at the half and final score was 66-41.
[Delete]
Way to go Lionettes! Great teamwork. You make our county proud. Let's go all the way in the Boro!
mudd
[Delete]
Great Job Ladies! I bet Ms. Annie Cox is smiling down on you Ms. Taylor King. She would be so proud of you and the whole team.
[Delete]
Excellent Job to both the Lionettes and to Coach Dodgen!

Congratulations on an outstanding season and we look forward to another State Championship Trophy in our trophy case!
ssconnection
[Delete]
Great job Lionettes!!!!3 more for the trophy. You can dooooo it!!!!
[Delete]
Awesome job girls--go get that trophy!!Good Luck in the Boro!!!!!
awc96
[Delete]
Looks like Cannon County will open up against Elizabethton Thursday at 11:30. Go Lionettes!!!!!!!!!!!!!!!!!
[Delete]
So proud of each and every one of you Lady Lionettes. Good luck this week!
[Delete]
Good Luck In the Boro Girls. So proud of you.