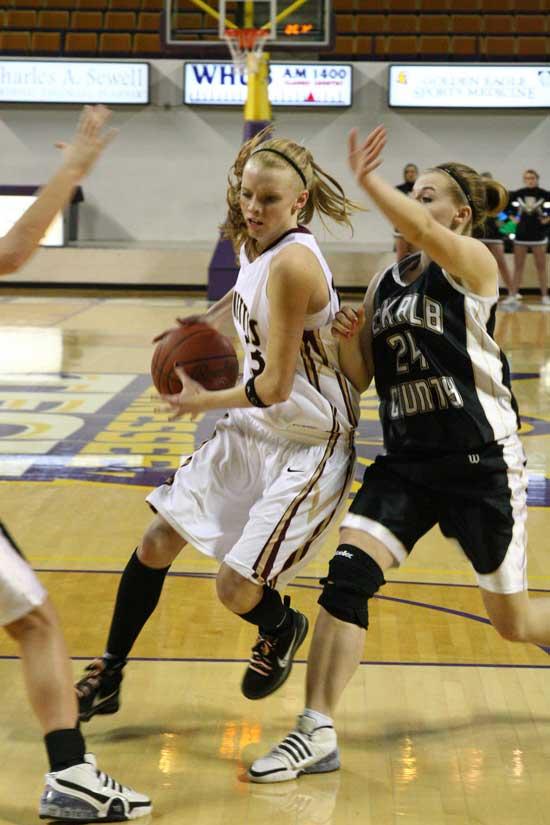 Taylor King drives the ball up the middle in district tournament action against DeKalb County Friday in Cookeville. (Casey Hindman photo)
COOKEVILLE — The top-seeded Cannon County Lionettes opened their district tournament play against the DeKalb County Lady Tigers in semifinal action Friday. Playing without starting post, Lauren Ruehlen, who is lost for the remainder of the season due to a knee injury, the Lionettes were determined to prove that they deserved the No. 1 seeding by running out to a 9-1 lead in the first 3:00 of play on baskets by Emily Sissom and Chelsey Payne.

Dekalb cut the lead to three with 2:50 remaining, but baskets by Ashley Campbell and Taylor King pushed the lead to ten, 19-9, by the end of the quarter.

The Lionettes opened the fourth with two Sissom 3-point baskets and 2-point baskets by Sissom and Lindsey Reed, taking a commanding 61-31 lead as they coasted to a 68-43 opening round win.

The Lionettes (24-3) will play Upperman Monday night at 6 p.m. at Tennessee Tech for the district tournament title. The Lady Bees handed Cannon County two of its three regular season losses. Both teams will advance to the region tournament.

The Lions’ semi-final was another match-up against a district team that they had lost to twice in the regular season. The last time Cannon played the Livingston Wildcats, the Lions were on the 21-point losing end of the game. They hoped to make a much better showing in their Friday night game against the Wildcats.

Things did not start well for the Lions falling behind, 8-0, after 4:00 of play. The Lions finally got on track with baskets by Andrew Woodin, Justin Davenport, and Brian Cripps, cutting the lead to 8-6 at the 1:45 mark. The Wildcats took a 4 point lead with 20-seconds left on the clock setting the stage for a Justin Davenport buzzer-beating, off balance, desperation 3-point shot cutting the lead to 12-11.

The Lions had a difficult time hitting from the floor in the second shooting less than 30% while the Wildcats were shooting over 60%. Cannon took a 1 point lead on an Ethan Womack 3-point basket, but fell behind 16-13 on two quick Livingston baskets. The Lions tied the score at 16-16 on Womack’s second 3-point basket , but Livingston answered with a 10-0 run over the next 2:30 minutes taking a 26-16 lead with 3:26 left in the quarter. The Lions managed to cut it to 5, but the Wildcats ended the quarter with 6 points taking a 32-21 half time lead.

Cannon made the necessary adjustments at the half and came out playing a much better defensive game forcing 6 turnovers and holding Livingston to 40% shooting. Davenport opened the quarter with a 3-point basket followed by a Nave 3-point basket and 2 foul shots, keeping the Lions within striking distance. Trailing by 9 at the 4:10 mark, the Lions finished the quarter with a 7-0 run to close the gap to two, 40-38.

The Lions opened the fourth with an Andrew Woodin 3-point basket giving the Lions a 41-40 lead and a Colin Jones basket pushed it to three, with 6:00 remaining in the game. Livingston regained the lead holding a 50-45 advantage at the 4:00 mark. A basket by Davenport and Brad Hutchins cut the lead to four, but that was as close as the Lions could get as they fell to the Wildcats, 60-53.

The Lions play in the district consolation game tonight at 7:30 against York. The Lions will also advance to the region tourney.