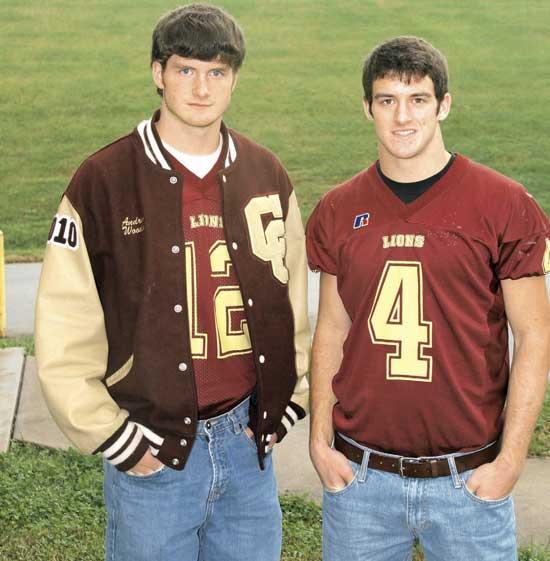 Twins (from left) Andrew and Daniel Woodin played key roles in helping Cannon County win the District 8-AA title and a berth in the TSSAA Playoffs, which begin Friday.
It's always been said that good things come in pairs. And that's just the case with twins, Andrew and Daniel Woodin. The twins are the sons of Jeff and Lela Woodin of the West Side community.

The boys are seniors at CCHS, and both are involved in many school activities.

Andrew plays several positions on the football team, including receiver, running back, safety, and outside linebacker.

He is a power-forward on the basketball team, plays center field in baseball, and midfield for the soccer team. He was voted Best Defensive Back in football 2007, and 1st Team All Region, 2008.

Andrew is a member of the Beta, HOSA, FCA, and Leo clubs. His favorite subject is math, movie: action/adventure; music: country; and restaurant: Mexican.

Andrew plans to attend college at either UT Knoxville, UT Chattanooga, or UT Martin, where he hopes to major in sports medicine/ physical therapy. His future goals are to graduate from college and raise a family.

Daniel plays running back and corner back for the football team, and also plays for the soccer team.

He was chosen as the Tennessee American Legion Boys State Delegate, Leo Club vice president, and Sergeant at Arms for his senior class. Daniel was also awarded District MVP in soccer.

He is a member of the Beta, Leo, HOSA, and French clubs. His favorite subject is history, music is blues, rock, and blue grass, and restaurant is Fazoli's.

Daniel is unsure which university he wants to attend, but he hopes to graduate, learn to fly an airplane, and eventually own a '69 Chevelle.

The twins and the rest of the Lions will be TSSAA Playoff action Friday night when the Lions welcome Harbeth to Woodbury for a first-round game. Kickoff is at 7 p.m. Tickets are $8.