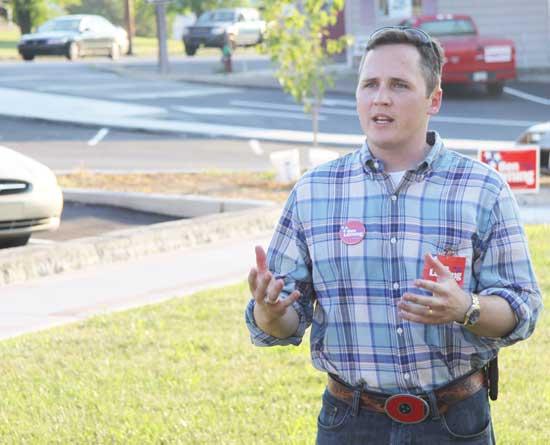 Sixth District Congressional candidate Ben Leming speaks during the rally Monday.
Two candidates, one running for United States Congress and the other for the Tennessee State Senate, held a rally Monday night outside the Cannon County Courthouse.

There were about 20 to 25 people in attendance, including family and campaign staff of the candidates.

Given told those gathered that his focus if elected would be on getting people back to work in Tennessee, protecting and giving incentives to family farms, and improving the quality of life in the state.

Born and reared in Lebanon, Givens, an attorney, is an active member of the Wilson County, Robertson County, and Nashville Bar Associations. He has served as an alumni class chair for the Nashville School of Law Recognition Dinner and Silent Auction. A former Wilson county 4-Her and member of FFA, Givens devotes much of his spare time to mentoring young people.

The rally was staged by Ben Leming of Rutherford County, one of five Democrats running to become the next Sixth District Congressman. Also entered in the August 5 Democratic primary are Henry Clay Barry of Wilson County, Devora Butler and George Erdel of Rutherford County and Brett Carter of Davidson County.

Marine Captain Leming is a veteran of the Iraq War. He grew up in Murfreesboro and graduated from Oakland High School where he excelled in wrestling and track and field. Leming joined the Marines at seventeen. Congressman Bart Gordon later appointed Leming to the United States Naval Academy where he earned his undergraduate degree and commission in the Marine Corps.

Leming said that sacrifice is need in Washington and added, "We need people who will do something that will help us and that is why I want to go to Washington."

Leming also said it is "high time we broke our dependence on foreign oil" and that can be accomplished by developing alternative methods of producing energy, which will create jobs.

He also said that if elected he would work to bring down the cost of heath care and make sure that all citizens had access to good, basic medical treatment.

"I would like to continue to serve my country, and that is why I stepped up to run for Congress," Leming said.

Aubrey Givens is running for the State Senate.

Print
Members Opinions:
jhnonline
[Delete]
I did not agree with all of Bart's views on some pretty important issues but I think he served our district extremely well. From what I have seen and heard so far, I think Ben Leming would be very effective in representing the views of the people of the sixth district. He has already placed his life on the line to defend our way of life.