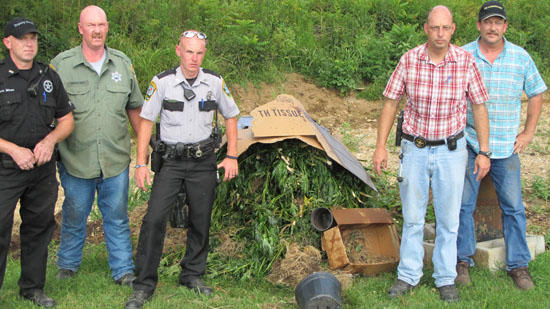 Two residents of Payton Lane, off of Short Mountain Highway, were taken into custody and were being questioned at the sheriff’s department Saturday evening.

The Cannon Courier will publish the names of the alleged pot growers after formal charges are placed against them. The investigation continues and it is possible additional arrests could be made.

Deputy Brandon Gullett initiated the discovery of the marijuana growing operation Saturday while investigating the reported theft of a tractor.

While in the process of locating a person he was going to interview, Deputy Gullett observed a large black flower pot with three green plants growing out of it.

“I stopped to take a better look at the green plants and observed them to be marijuana,” Deputy Gullett said. “I then made contact with the resident of the trailer. Upon talking to him he denied having any marijuana plants.

“We then walked from his residence to the black pot which had three marijuana plants growing in it. While I was talking to (the resident) Sheriff Darrell Young arrived at the location. We observed a trail from the black pot going into the woods. We followed the trail and observed multiple marijuana plants growing in the ground and in flower pots,” Deputy Gullett said.

A total of 228 marijuana plants were discovered at three different addresses. Their street value is estimated at $228,000. The plants were taken to the sheriff’s department and burned.

Investigator Mike Cawthon and Investigator Young were interviewing the suspects Saturday after they were read their Miranda rights.

Print
Members Opinions:
[Delete]
Yippee they found those lethal plants. Now finally the streets are safer tonight.....
[Delete]
They found illegal plants. That is their job. Lawmakers make the laws. Law officers enforce them.
[Delete]
yes sir you are correct they do enforce the laws.. they also enforce this so called "war on drugs" which has been so so beneficial and greatly helpful for our country................gimme a break
[Delete]
The "break" you want can not be given by me, or by law enforcement, or by the legal system. It can only be given by lawmakers in the state and federal government.
[Delete]
There have been about a dozen meth busts so far this year, so I don't think there is a lack of focus on the problem. Officers take an oath to enforce all laws, not just the ones they want too.
TnT
[Delete]
The streets would be safer if they could get all the pot growers, meth producers and ppl selling pills in this county.It amazes me how many people around here think pot is "ok". It's not ok. Too many ppl just look the other way. Great job CCSD!
ladyreader
[Delete]
No matter how hard you try, you just can't make some people happy! I think that Sheriff Young and his officers are doing a good job. Better than the previous folks we had in there.
redbird
[Delete]
Have you ever seen children taken from the homes of drug users? It is heartbreaking, the children are the real victims of meth users and addicts of all kinds not just drugs but alcohol as well. The sheriff department is doing a good job. The plants they burned will be taken off the street and not destroying some home somewhere.Once people are hooked they care less about their children or anything else.