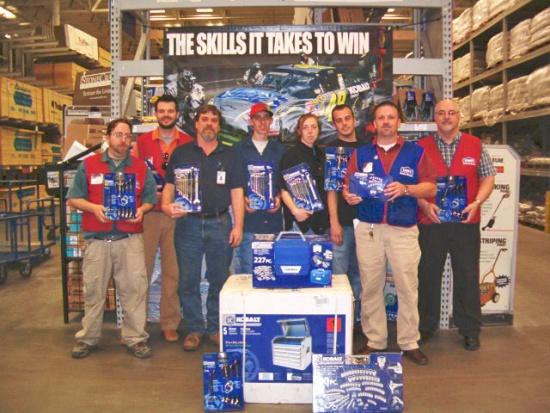 Lowe’s is donating approximately $1,100 worth of Kobalt tools to the school as part of the national program, which will total about $450,000 to 400 SkillsUSA automotive service technology programs across the nation for use in their classrooms.

SkillsUSA advisor, Eric Creekmore, was selected to receive the toolkit for the local Automotive Technology program at the Tennessee Technology Center at Murfreesboro.

“This is a wonderful example of how industry works to partner with education, for the betterment of the technical program and the success of my students,” said Mr. Creekmore. “SkillsUSA has had a huge part in the transformation of my students because it has provided skills and leadership training that they don’t get anywhere else. Lowe’s and Kobalt Tools support reinforces what we are teaching in the classroom and shows the value of education-industry partnerships.”

The national program kicked off in March at the Lowe’s of Edgewood in Atlanta, where four-time reigning NASCAR Sprint Cup Series champion Jimmie Johnson personally delivered the first sets of tools to students from Jonesboro High School. He made the visit to the Lowe’s store just prior to the March 7 Kobalt Tools 500 NASCAR Sprint Cup Series race.

“By working with Kobalt Tools and SkillsUSA to proved tools to these student, Lowe’s is able to help prepare the future of America’s skilled workforce in their chosen career paths,” said Larry D. Stone, chairman of the Lowe’s Charitable and Educational Foundation.

“With Kobalt tools in their toolbox and training from their schools and SkillsUSA, students will be better prepared for success when they enter the workforce.”

Two of the students, Cindy Bogle and Matt Avera, are from Woodbury.