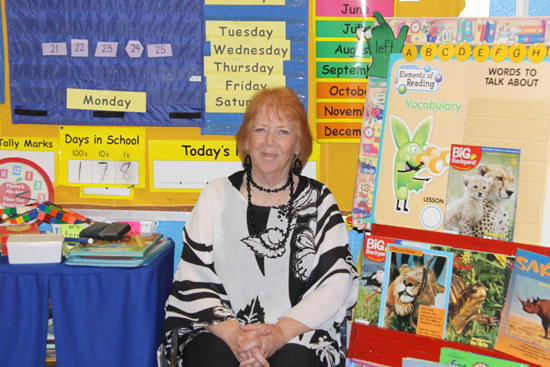 BETTY KING
Betty King’s crystal blue eyes still sparkle when she talks about education and Auburn School, where she has taught children for more than four decades.

After 43 years in education, King’s longstanding commitment to educating youth in the Auburntown Community officially ended last week when she retired from the Cannon County Schools System.

She spent 40 of those 43 years teaching at Auburn School, providing the foundation of education to young people as their first grade teacher for a majority of those years.

“I will miss the students,” King said. “Just seeing the children learn is what I have enjoyed most through the years. I will miss that. I really will miss the teachers. We are like a family here at Auburntown and that is the reason I have taught here so many years. This is my home away from home.”

Not only has King taught children of former students, but she also has taught their grandchildren. She never thought about retirement or believed the day would actually come.

“I came from a family of teachers and it is in me,” King said. “I have never dreaded coming to work. If I could teach until I die, like Mrs. Annie Cox, I would be happy, but I can see that is not what I need to do. I need to enjoy life because there are no guarantees.”

It is not the students or stress of the job that has driven King into retirement; rather, it is a perception of not being able to truly do the job she enjoys – teach children at a rate that allows them to grasp education and appreciate it.

“The past few years it has gotten bad with all the evaluations and stuff,” King said. “It puts a lot of pressure on us that we don’t need. If the state department would understand that we are here to teach and leave us alone and allow us to be professionals, which we are, and let us do our job instead of putting all of this on us it would be better. If they would just understand that we know what we are doing.”

King said the rigors of testing and the emphasis placed on TCAP testing puts added pressure on youngsters, particularly in the upper grades.

“We have a lot more curriculum now than we did, say, 10 years ago,” King said. “You don’t have time to enjoy the kids with all the testing and pressure of testing. You have to push, push, push and make sure they get to a certain level. Some kids have to be pushed more than others, but I wish it was different. I know testing is inevitable, but I wish we didn’t have the pressure and I wish the kids didn’t feel the pressure. I wish they could enjoy learning at their rate and not have to worry about those TCAP tests. The upper grades have those scores on their report cards or they fail and I see it as unfair.”

Education seems to have become more about one weeklong test than it is the value of 12 years learning in the system but the negative is that all students do not test well as others. Despite changes in education and requirements through the years, King has endured.

Her students – past and present – believe she has been instrumental in their development.

“Mrs. King was one of the first teachers I had,” said Dustin Mears, who graduated from CCHS last Friday. “She is as good as gold. She helped me to understand and learn at a young age and some of the things I learned from her have followed me through school. She was the start of my education.”

“She was my first-grade teacher,” Crook recalls. “She will be greatly missed. She gives 110 percent every day she is here. She comes when she is sick and we have to make her go home. The rules have changed, kids have changes but she is still the same as she was when I started school.”

King’s start into education was not as smooth as she made it look during a remarkable tenure in Auburntown. Born in Athens, Ga., King earned her BS Degree at David Lipscomb College in 1969.

Her first teaching job was third and fourth grade math in LLa, Ga.

“It was not a good experience,” King recalls. “I told myself teaching was not for me; I was going to find a new career! I moved back to Nashville to room with a few friends. Since they were teachers, they convinced me to look for a teaching job.”

Her next stop was Auburn Elementary. She taught 42 students in fifth and sixth grades. That summer she married Auburntown native John D. King.

“We moved to Nashville where he was working,” Betty said. “I didn’t plan on teaching anymore; however, my Heavenly Father had other plans for me.”

King taught fourth grade at St. Joseph’s Catholic School (although she’s Church of Christ), for three years before returning to Cannon County in 1973 when she and John bought a farm on Hurricane Creek Road.

She began teaching at Gassaway Elementary School, where she was responsible for first, second, third and fourth grades. She also was the principal and managed the kitchen. Gassaway was a two-teacher school with 54 students.

“That was quite a year to remember,” King said. “That summer Gassaway School was struck by lightning and burned to the ground. The next year (1974) I was hired at Auburn Elementary again.”

She has been a fixture at the school since.

Even though King will be retired, community members will be relieved to know she still expects to substitute teach in her spare time.

“This is home and Auburn School is my home away from home,” King said. “These children and people mean so much to me.”

There will be a new first-grade teacher at Auburn School in 2012-13; however, Betty King will always be a part of the school and its future generations because of the countless number of young people she has impacted.

Print
Members Opinions:
[Delete]
I had Mrs. Betty as a teacher at Gassaway and Auburntown. I can still remember things that she taught us. Congratulations Mrs. Betty. Cannon County school system is losing one of the very best teachers it ever had. She was truly there to teach the kids.
cherleader
[Delete]
Mrs. Betty, We love you and are so proud to have you as a friend. The childern's lives you have touched have been changed because of your hands and love. You are an inspriration and role model to so many lives!!
TnTnTn
[Delete]
Congratulations to you Ms Betty King for years of service in the Cannon County school system helping our most precious asset, our children, to learn. Wishing you a long and enjoyable retirement. Again-Many Thanks. TTT
toddh
[Delete]
Thank you Mrs. Betty! We all love you and hope you can enjoy your summer! You are one of the best ladies that I have ever known. Thank you for all the things you have done over the years here in Auburntown!