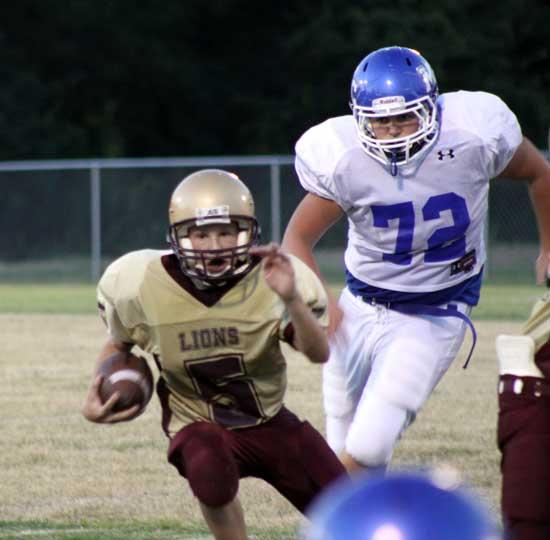 Quarterback Jake Todd runs away from a Macon County defender. Todd threw for more than 75 yards in the Junior Lions’ setback.

Garrett McReynolds hauled in a 31-yard touchdown pass from quarterback Jake Todd in the fourth quarter but that was the only scoring of the game for Cannon County as the Junior Lions dropped a 28-6 decision to Macon County Thursday night.

Todd had a strong fourth quarter and performed well throughout the game, throwing for more than 75 yards and moving the offense when given time to operate. Receiver Jacob King had a productive game, catching four passes for more than 50 yards to help pace the Lions offense.

“We had some good moments and did some good things, at times, but we made too many mistakes that put us in a tough spot against a good team,” Junior Lions coach Randy Farnsworth said. “It’s tough when you are constantly playing from behind and make mistakes that put the other team in good position. Right now it’s just a few big plays here and there getting us beat.”

Cannon County trailed 20-0 at the half and was the victim of three long plays that proved to be back-breakers. The Lions surrendered a 58-yard scoring run, a 26-yard scoring run and a 71-yard kickoff return. In each instance the opponent scored in two plays or less and Macon County always seemed to stick the dagger right after Cannon County had moved the ball only to turn it over or make mental mistakes that led to punts.

The Lions put together an 11-play drive right off the bat before a penalty and two lost yardage plays backed them up and forced a punt. Cannon County also was guilty of numerous bad snaps that put the offense in bad position.

Cannon County (1-2) won at Red Boiling Springs, 6-0, last Saturday when Jake Hoskins scored the lone touchdown and some of the same strong defense was on display against Macon County at Fred Schwartz Field Thursday. The problem for the Lions was Macon County seemingly didn’t need too much room to make things happen.

A.J. Daniel, Allan Robinson and McReynolds had key stops on defense but it wasn’t enough to curtail the Macon County offense. The Lions return to action against Jackson County at Schwartz Field Thursday at 6:30 p.m.

Wilder Mankin secures the ball as he is tackled by a Macon County player after a reception.
Read more from:
CANNON COMMUNITY
Tags:
None
Share: