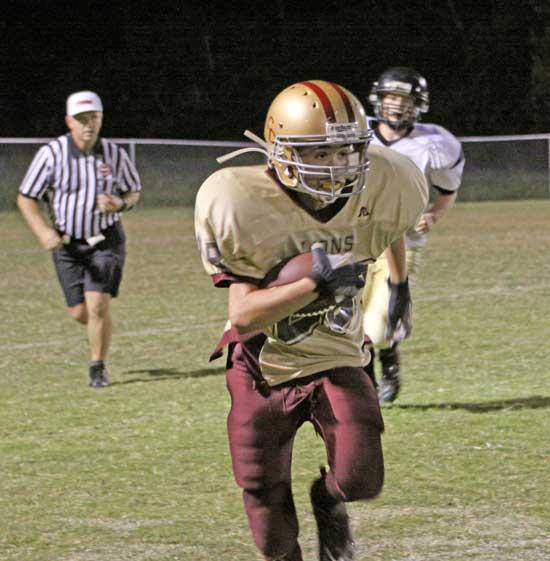 Garrett McReynolds sprints upfield to move the JR Lions into scoring position.
It was only fitting that A.J. Daniel's interception at the 23-yard line sealed a 14-12 win for the Cannon County Jr. Lions against Celina in the regular-season finale at Schwartz Field Thursday night.

After all, it was a suffocating, swarming defense that put the Lions (3-5) in position to secure victory and that same stop squad put the finishing touches on a hard-fought win. Celina had driven from its 16 to the Cannon County 35 with under two minutes remaining and the game hanging in the balance and the defense needed its biggest stop of the night.

The unit came through in a big way. Jake Hoskins' sack pushed Celina back to its 47 on a big second down play and Garrett McReynolds followed with a pass deflection to set up one final chance with under a minute remaining. On a fourth-and-28 from its 47, Celina, which had already completed a big pass play to make things interesting, went for it all with a pass deep down the field.

Daniel intercepted the underthrown pass to seal the win and cap a defensive showcase for the Lions.

"I wasn't sure if they were going to throw it, run a reverse or try something like that, but I knew if the receiver got behind me it could mean a touchdown," Daniel said. "I was determined not to let the receiver beat me. The pass was underthrown and tipped by our safety and I was able to get the interception. I was just glad for our team to get the win because we had battled hard the whole game."

All of the scoring took place in the first half.

Quarterback Jake Todd connected with Daniel for the Lions' first score and Hoskins added the other.

Cannon County's defense was unscored upon; however, Celina grabbed an early 6-0 lead when its defense forced a fumble on the Lions' opening drive and returned it for a touchdown. The conversion attempt failed.

The Lions quickly answered with an impressive scoring drive capped by quarterback Jake Todd's 14-yard pass to Daniel, who hauled in the reception at the 6 and was met at the 3 by four Celina defenders. Daniel never quit moving his feet and eventually powered his way into the end zone, carrying the defenders with him. The 2-point try failed and the score was 6-6 with 3:48 remaining in the opening quarter.

"They hit me about the 3 and it seemed like I was stopped, but I just kept going and pushing and finally I got in the end zone," Daniel said. "The line did a great job to get us down there in scoring position."

The scoring play was set up by a 45-yard run from Hoskins and another big run from Todd, who eluded pressure and cut inside tackle Allan Robinson to get into the open field.

Cannon County's defense set up the go-ahead score when McReynolds recovered a fumble to give the Lions possession at the Celina 28. Todd rambled 23 yards on the first play from scrimmage and two plays later Hoskins bulldozed his way into the end zone from 3 yards out to give the Lions a 12-6 lead as time expired in the first quarter. Wilder Mankin provided what proved to be the game's decisive points when he scored the 2-point conversion on a rushing play to pad the lead to 14-6.

That would be the extent of the scoring for Cannon County, which turned to its defense to secure victory.

Celina scored on a 73-yard punt return to pull to within 14-12 with 3:08 remaining but the visitors wouldn't threaten again until their final drive that was curtailed by the Lions' stingy defense.

The Lions held Celina to less than 100 yards total offense with a host of players providing significant plays. Linebackers Bo Bryson and Jackson Mason were key in the middle, while a strong defensive line, led by Robinson, Terry Parker and Aaron Franklin, controlled the line of scrimmage.

Cannon County will close the 2010 season in a bowl game at Schwartz Field Oct. 16.

Print
Members Opinions:
[Delete]
I would like to say Thank You for putting are boy on your web site it relly lifted there sprits