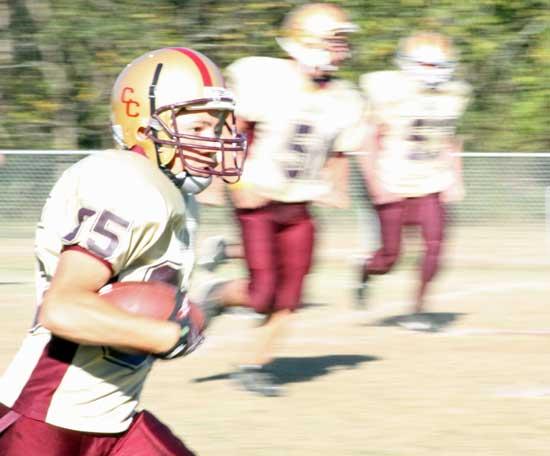 Jake Hoskins gets to the outside and turns it upfield for 30 yard touchdown run.
Cannon County's JR Lions capped their season in style with a convincing 22-6 win against outmanned Pickett County in the Cannon County Bowl at Schwartz Field Saturday afternoon.

Quarterback Jake Todd threw two touchdowns and passed for 94 yards in the win, while heralded back Jake Hoskins had more than 90 yards on just seven carries, including a 30-yard rushing score to lead a strong ground attack.

Receiver A.J. Daniel was on the receiving end of a Todd 64-yard touchdown pass. Daniel took the screen pass on the left side and weaved in and out of traffic before outrunning the defenders and racing into the end zone. Garrett McReynolds also had a touchdown reception, grabbing a 14-yard pass from Todd to get the scoring started with less than two minutes into the game. Daniel added the 2-point conversion run to lift the host team to a 8-0 lead.

The Lions increased the advantage to 14-0 on the final play of the first quarter when Daniel took the screen pass that essentially broke Pickett County's spirit. They scored their final touchdown late in the second half when Hoskins ran in from 30 out. The last five yards of the scoring run were the most impressive as he carried five defenders into the end zone with him.

Team play was a big part of the win as the Lions received strong all-around play on offense and defense. The Lions starting offensive line that included Allan Robinson, Dustin Hutchins, Austin Mills, Jake Duggin and Jacob Morton dominated the line of scrimmage, proving plenty of protection for Todd and gaping holes for the ball carriers.

The Lions defense did not allow a touchdown as the only Pickett County score came on a kickoff return, and it recovered a fumble caused by Robinson to set up a score. The stop squad was led by Mason, Aaron Franklin, Terry Parker, Case Isenhart, and Bo Bryson, among others.

• The Cannon County Little Lions suffered a 14-0 setback in their playoff game against Watertown Saturday. The game was in question until Watertown scored a late touchdown to seal its victory. The Lions will face the loser of the Gordonsville/Baxter game in the consolation game at Gordonsville Saturday.

Print
Members Opinions:
[Delete]
I dont know how many players the high school team will lose next year lets pray that the stop squad plays these boy seam to be good