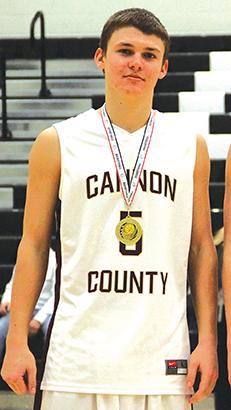 MANCHESTER - The Cannon County Lions will play in their second straight tournament in December at the 2014 Marlin Christmas Classic in Panama City Beach, Fla., from Dec. 29-31.

The three-day event will play host to eight teams, four from Tennessee, two from Kentucky, and one from Florida and South Carolina.

"I definitely expect to play some tough competition. We always play our best against the toughest teams," head coach Matt Rigsby said. "At the end of the day, I still expect them to understand we came down here to win a tournament."

Cannon County's opening game of the double-elimination tournament will be Monday at 6:00 p.m. when they play Marshall County, Ky., at Arnold High School.

Arnold High School will play host to a dozen boys' games including the championship at 7:30 p.m. on Wednesday.
Seeing that the Lions win their first game, they will play the winner of Wren, S.C., and Columbia, Tenn., at 4:30 p.m. on Tuesday.

The four Tennessee teams represented in the tournament are: Columbia, Cannon County, University School and Moore County. Webster and Marshall County are the two teams from Kentucky, and Wren, S.C., and Arnold, Fla., round out the 8-team tournament.

Every game will be streamed live online for free at www.psblive.com.

MANCHESTER - There is "no doubt" in head coach Matt Rigby's mind that Josh Ruehlen is playing his best basketball yet at Cannon County.

Ruehlen, a 6'2 senior point guard, has all the traits needed to quarterback an offense efficiently, starting with his maturity and command of the Lions' scheme.

"I'm really proud of his maturation process... to become more (of a) student of the game and understand our system and our style of play and the way we want to play," Rigsby said.

In Ruehlen's past nine outings, he's averaged 18 points per game to lead Cannon County. His game-high during that span was 32 against Smith County where he finished 10-of-13 from the field and converted all 10 free throw attempts.
"It's always nice to be a 6'2 point guard, you can't trap him," Rigsby said. "It's always nice to have the length that he does with the touch he has to shoot the basketball where he can get his looks (and) elevate over guys."

And that is where Ruehlen really affects his teammates, with his unselfish play and ability to make teammates around him better.

"He's a true point guard in that aspect, he gets everyone involved," Rigsby said.

While playing at Macon County in December, Ruehlen was talking to Rigsby near the Lions sideline in between free throws about the type of adjustments he thought the team should make.

Rigsby nodded his head, agreeing with Ruehlen's evaluation.
Rigsby calls it an opportunity to "speak freely," something he asks of Ruehlen and the rest of his lineup to do in order to benefit the team.

"Josh is doing a really good job of communicating things to me that he sees on the floor," Rigsby said. "I want my guys to communicate to me."

Outside of being a floor-general for the Lions, Ruehlen is regarded as a natural scorer, posing a threat to take over a game at any moment by creating his own shot and cashing in close to the rim.

"I've coached two of the top three scorers in the school's history and the way he's playing right now he is right up there with them in terms of how he can take over a game," Rigsby said.