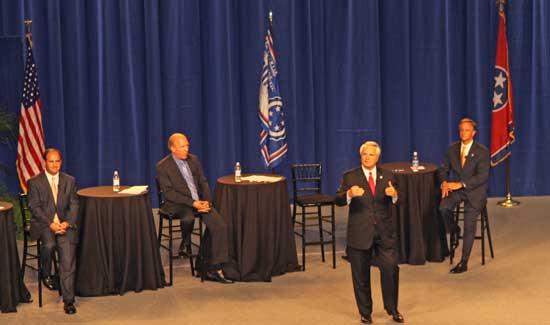 Republicans Zach Wamp, Bill Haslam, and Rom Ramsey along with lone Democrat Mike McWerther laid out their visions for the state and responded to a number of specific questions. All candidates focused on job creation and balancing the state budget.

Jackson Democrat and businessman Mike McWherter proposed tax incentives for small business who create jobs. "We also want to go after the supplying industries for large manufacturers like Volkswagen, etc. If someone's making their seat belts we want them in Tennessee and not in Kentucky, not in North Georgia."

Republican candidate Bill Haslam, who boasts six and a half years executive experience as Mayor of Knoxville, also stressed the need for Tennessee to appeal to industry, saying "we don't need to match these packages other states are offering. We have no income tax, right to work, and a great location... Incentives that attract business always need a measurable return for our shareholders -- the Tennessee taxpayers."

Zach Wamp of Chattanooga, who has served 15 years in the U.S. House of Representatives, said the way to create jobs is to let small businesses grow and operate with minimal interference. "We've got a lot of bureaucrats running Tennessee. More and more paperwork... We want to get the State's regulatory arm off my shoulder and out of my business."

Lt. Governor of Tennessee Rom Ramsey supports streamlining education to yield a more capable Tennessee workforce. "We need more people graduating who are entering higher education... Not everyone needs four years. Failing schools need to be identified and we need to address their problems with outside-the-box thinking."

All candidates stressed the importance of a balanced budget for Tennessee, hinting at the tough choices the new Governor will be forced to make as Federal Stimulus money dries up the same month he assumes office.

Representative Wamp and Lt. Gov. Ramsey both emphasized the need for Tennessee to stand up to the federal government with Ramsey envisioning the state as an "island of sanity in a country gone mad" and Wamp forecasting the whole country changing "from the bottom up in states like Tennessee." Both candidates also took stabs at the recently passed national health care reform, with Ramsey calling it a "mess" and Wamp hinting that we need a more hawkish Attorney General to resist mandated coverage.

Bill Haslam is likely to appeal to more moderate voters. "I realize that you don't govern in a vacuum," he said meaning that political and economic realities can trump personal beliefs. "Being a Mayor, you live in real life circumstances."

Early voting begins July 16 for the August 5 primary. The election will be held November 2.

More information can be found about each candidate at their website.

Mike McWerther speakers with a reporter at the forum.

Zach Wamp, left, is interviewed by a reporter.

Ron Ramsey being interviewed at the forum

Print
Members Opinions:
Straitupmarilyn
[Delete]
While we are looking at Candiates for Governor, we really need to find out whos really running things here in this county... If the community don't come together to see and find out where their money is going, and who is really speaking for them... You can't blame anyone but yourselves.. It will become business as usual....at the expense of many.