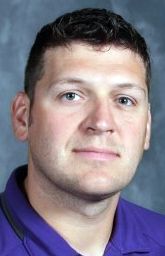 A press conference will be held on Tuesday, May 21, 2019 at 3:00 p.m. at the Cannon County High School Cafeteria to announce his hire as CCHS boys basketball head coach.

Mr. Jason Knowles grew up in Norene, Tennessee and went to Watertown High School where he played basketball, football, baseball, and golf. He attended Cumberland University and majored in History, where he was a member of the PI Gamma Mu Honor Society. He played baseball at Cumberland University from 2003-2006 and was a member of the 2004 NAIA National Championship Baseball Team under legendary Coach Woody Hunt.

Knowles referees high school football and was on the 2016 State Championship officiating crew. He is 34 years old, attends Fall Creek Baptist Church, in Norene, and enjoys spending time with his family, friends and his German Shepherd, Kylo. He also enjoys watching the Cincinnati Reds, playing/watching tennis, fishing, going to concerts and jogging.

Professionally, Knowles is in his 11th year in education and coaching at Watertown High School, with one year at Mt Juliet High School and Wilson Central. At each school he taught History, Geography, and several Advanced Placement courses. Knowles has been selected for the past two years as an Advanced Placement Human Geography Reader, scoring AP Human Geography Free Response Questions from high schools all over the country. He was a 2003 graduate of Watertown High School and received his Bachelor's Degree at Cumberland University in History and his Master's Degree in Education.

Knowles has coached basketball under Coach Matt Bradshaw at Watertown, leading the JV team to consecutive league titles. He has been the head cross country and tennis coach leading the Purple Tigers to their first appearances at the state tournament in both sports. He has also helped coach football and baseball for several seasons.

CCHS Principal Courtney Nichols recommended him to Director of Schools William F. Curtis, and Mr. Curtis accepted his recommendation. Coach Knowles met with CCHS boys basketball players on Thursday, May 16th, 2019, will be conducting Boys Basketball Tryouts on Tuesday, May 28 and Wednesday, May 29, 2019, and will be meeting with Boys Basketball Parents and Boosters soon afterward.

Cannon County High School Principal Courtney Nichols commented, "Mr. Knowles will bring enthusiasm not only to the basketball court, but the classroom as well. His forward thinking ability and professionalism as a coach, combined with his energy and passion he possesses on the basketball court and in the classroom, will transfer to success with our Boys Basketball Program."

Director of Cannon County Schools - Mr. William F. Curtis stated, "I am extremely impressed with Mr. Jason Knowles's experience as an outstanding educator and basketball coach. His expertise in the History classroom and his experienced coaching abilities will exemplify Cannon School's MISSION - 'Preparing All Students for Their Future' in our Boys Basketball Program and the School System's VISION - 'New E3 - Engaged in Excellence Every Day' on the basketball court. I sincerely believe his character and commitment will bring a spirit excellence to our Boys Basketball Team and Program. "

Cannon County Schools welcomes Mr. Jason Knowles as CCHS Boys Head Basketball Coach and looks forward to excellence, both in the classroom and in athletics, at Cannon County High School!